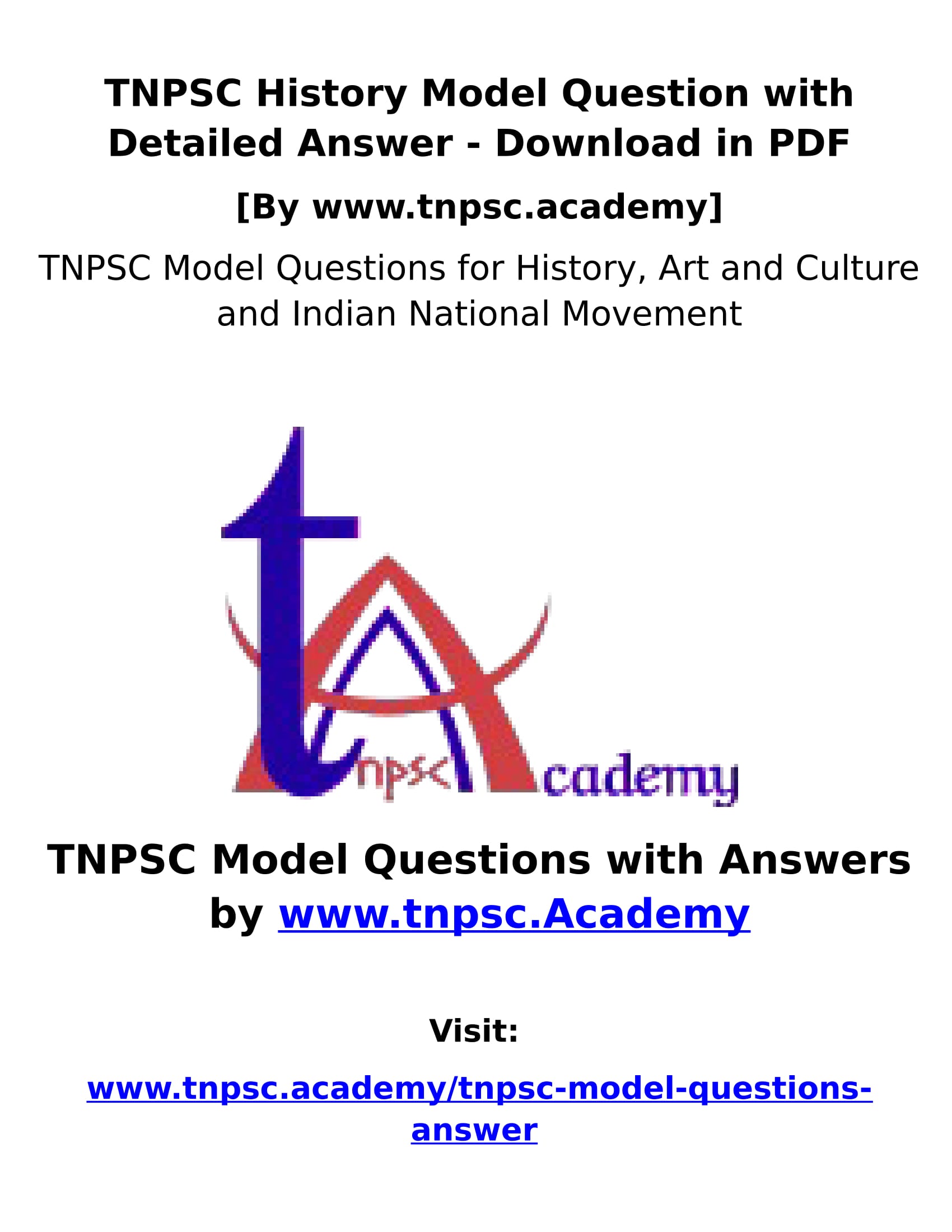 1. The term ‘Harappa’ in sindhi means?

b. Mound of dead

Harappa in Sindhi means ‘Buried City’. Mohenjo-Daro in sindhi means ‘Mound of Dead’. Burnt Brick was used by Harappans for construction in the town.

2. For making ornaments and other usage, the Indus people used

d. III and IV only

Iron was not known to the Harappan people. To make ornaments, they used Gold, Silver, Ivory and precious stones and also ornaments out of shells and copper. Both men and women wore many ornaments.

3. The Tamil language spoken in Tamil Nadu can be appreciated as like following except

4. The river that was said to have flown on the landmass of ancient ‘Kumari Kandam’ was

Before prehistoric period, the Indian Ocean on the south of Cape Comorin was a land mass. It was called as ‘Kumari Kandam’. The river Fahruli ran on this land mass which was eight to ten times bigger than South India. Whereas river Saraswathi was an ancient river thought to have existed in the North-West India.

Vishnu Vardhana, a brother of Pulakesin-II, was the founder of the Eastern Chalukya Empire of Vengi. One of their descendents namely Kulothunga Chola (1071 – 1122 A.D) was enthroned as a Chola ruler.

6. The First Battle of Tarain (1911 A.D) was fought between Rajput ruler Prithviraj Chauhan and

a. Mahmud of Ghazni

b. Muhammad of Ghori

b. Muhamma of Ghori

In 1189 A.D Muhammad of Ghori captured the fortress of Bhantida and advanced into the kingdom of Prithviraj Chauhan, the Rajput ruler. Prithviraj Chauhan with a large force won the battle and also recaptured Bhantida (First battle of Tarain 1191 A.D).

In 1192 A.D, in the Second battle of Tarain, Muhammad of Ghori defeated the combined forces of the Rajput rulers under Prithviraj Chauhan. Muhammad of Ghori appointed Qutb-ud-din Aibak as his commander. This was the start of Slave dynasty.

7. The followings are the Architectural styles of Pallava rulers except

b. Monolithic Rathas and Mandapas

Rock Cut temples introduced by Mahendravarman – I were excavated at places like Mahendravadi, Mammandur, Dalavanur, Thiruchirappali, Syamangalam, Thirukazhukundram, etc. The Monolithic Rathas and Mandapas were found at Mamallapuram. The Structural temples in the Rajasimha Style were found at Kailashnath temple at Kanchi, Shore temple at Mamallapuram.

Vihara is the name of Buddhist Monastry.

8. In the context of administration of Mughal Empire, match the following

These administrative setup was introduced by emperor Sher Shah sur and was followed by Mughal rulers and most effectively by Akbar.

9. The famous Angkor wat (temple) in Cambodia was built by which of the following South Indian Ruler?

(Std 11 – The Spread of Indian Culture in Other Asian Countries)

Yasovarman and Suryavarman II were two well-known rulers of Kambhoja kingdom (Cambodia). Here Temples were built in South Indian style. There are plenty of Sanskrit inscriptions. The most famous of these temples was the temple (wat) of Vishnu built by Suryavarman II in his capital city Angkor. It was popularly called as the Angkorwat Temple. It is standing on top of a terraced structure. Each terrace is a sort of a covered gallery which contains numerous relief sculptures. The temple is constructed on the Dravidian style and the sculptures depict episodes from the Ramayana and the Mahabharata

In the twelfth century, Ramanuja, who was born at Sriperumbudur near modern Chennai, preached Visishtadvaita. According to him God is Sagunabrahman. The creative process and all the objects in creation are real but not illusory as was held by Sankaracharya. Therefore, God, soul, matter are real. But God is inner substance and the rest are his attributes. He also advocated prabattimarga or path of self-surrender to God.

In the thirteenth century, Madhava from Kannada region propagated Dvaita or dualism of Jivatma and Paramatma.

11. As a part of Swadeshi Movement in Tamil Nadu, V.O.Chidambaram Pillai launched the Swadeshi Steam Navigation Company in the year

12. The Vaikom Satyagraha in Kerala was launched by

The Vaikom Satyagraha was a movement in Travancore (Kerala) against social segregation (especially untouchablity) in the year 1924-25.

13. The Chera ruler who founded the famous Pattini cult was

Pattini cult was related to worship of Goddess of Chastity Kannagi. Cheran Senguttuvan is said to have invaded the north and even crossed the Ganges.

14. The only surviving work of Second Sangam is

a) Tolkappiyam
b) Ettuthogai
c) Pattupattu
d) No works survived second Sangam as like first Sangam.

15. The Indo-Greek ruler Menander was converted to Buddhism by

Badrabahu was the Jaina saint who was followed by the Mauryan ruler Chandragupta Maurya. Amogavarsha and Vasumitra were patrons in the court of Kanishka.

16. The First session of the Indian National Congress was held at

Mahatma Gandhi was the president of Indian National Congress at only one time at Belgaum in 1924.

Bipin Chandra Pal was on the Extremist side of Indian National Congress. Were as, the others were Moderates.

18. The Home Rule League was established at Madras by Annie Besant in

Two Home Rule Leagues were established, one by B.G. Tilak at Poona in April 1916 and the other by Mrs. Annie Besant at Madras in September 1916. The aim of the Movement was to get self government for India within the British Empire. It believed freedom was the natural right of all nations

19. Mahatma Gandhi was the editor of which of the following

d. All the above

20. The Indian National Congress represented by Mahatma Gandhi attended the

a. First Round Table Conference

Congress launched the Civil Disobedience Movement in 1930. As a part of it, Gandhi led the Salt Satyagraha (Dandi march) in March 12, 1930. The British convened the First Round Table Conference in Nov 1930. No one from INC attended it and hence it was not successful.

Gandhi-Irwin Pact was signed in March 1931 and hence Gandhi accepted the invitation of British to attend the Second Round Table Conference (Sep to Dec 1931).