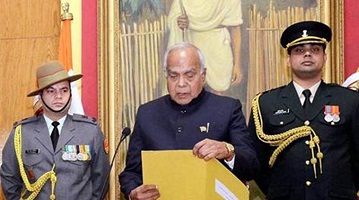 Infant mortality rate (IMR) is the number of deaths per 1,000 live births of children under one year of age.

There has been a significant 8% decline in country’s IMR, even though more infants are dying in the rural areas.

The union environment ministry notified the new Wetland (Conservation and Management) Rules 2017 which prohibit a range of activities in wetlands like setting up and expansion of industries, waste dumping and discharge of effluents.

The new rules will replace the 2010 version of the rules.

The new rules stipulate setting up of a State Wetlands Authority in each State and union territories that will be headed by the State’s environment minister and include a range of government officials.

They will also include one expert each in the fields of wetland ecology, hydrology, fisheries, landscape planning and socioeconomics to be nominated by the state government.

Wetlands can be defined as lands transitional between terrestrial and aquatic eco-systems where the water table is usually at or near the surface or the land is covered by shallow water.

Mount Manaslu is the eighth highest mountain peak in the world.

In May 2016, she climbed Mount Everest before scaling Mount Vinson Massif, the highest peak in Antarctica.

In 2014, she scaled Mount Kilimanjaro in Tanzania, the highest peak on the African continent.

Governors appointed for the 5 states are as follows:

Admiral Devendra Kumar Joshi was appointed as the Lieutenant Governor for Andaman and Nicobar Islands.

Banwarilal Purohit was working as the Governor of Assam now.

The Kandla Port, one of the top 12 major ports in the country, has been renamed as Deendayal Port after Hindutva icon Pandit Deendayal Upadhyaya from 25 September 2017.

It is located on the Gulf of Kutch.

Kandla is one of major ports on west coast.