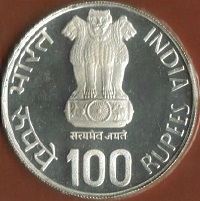 Bengaluru has selected among the top 25 high-tech cities of the world, according to research firm 2thinknow that specializes in analyzing innovative cities.

Bengaluru stands at number 19, climbing rapidly from the 49th spot it was at last year.

India has started producing ‘Civet Coffee’ the most expensive coffee in the world, in Karnataka.

Civet Coffee is made from the wastes of a species of cat called ‘Civet Cat’.

The coffee beans are then collected from the feces of the Civet Cat.

They are cleaned, processed and Civet Coffee is produced from that.

Due to the low amount of availability and wastage during processing this coffee is priced very high.

This is consumed largely in the Middle East and Europe.

The initiative of producing this coffee has been taken by a Karnataka startup called ‘Coorg Consolidated Commodities’.

This coffee is named as ‘Ainmane’ by the company.

RBI will introduce Rs 100 coins to mark the birth centenary of MG Ramachandran.

He was the AIADMK founder and former chief minister of Tamil Nadu.

The opposite side of the Rs 100 coin will bear “Lion Capitol of Ashoka Pillar” in the centre, with the legend “Satyamev Jayate” inscribed below in Devnagari.

The reverse of the Rs 100 coin shall contain the portrait of MG Ramachandran in the centre.

And also decided for a joint collaboration in manufacturing and in defence sector under the ‘Make in India’ programme.

India was one of the first countries to recognize Belarus as independent country in 1991.

Formal diplomatic relations were established and the Indian diplomatic mission was opened in Minsk in 1992 followed by Belarus in 1998 in New Delhi.

Belarus has been supportive of India’s candidature for a permanent seat at the UNSC.