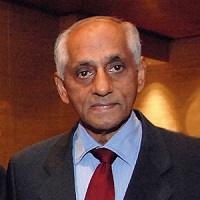 The National Nutrition Week will be observed throughout the country from 1st to 7th September.

The basic objective of this annual event is to intensify awareness generation on the importance of nutrition for health which has an impact on development, productivity, economic growth and ultimately National development.

Nutrition is an issue of survival, health and development for current and succeeding generations.

Child born underweight have impaired immune function and increased risk of diseases such as diabetes and heart diseases in their later life.

Joseph Yuvaraj Pillay, an Indian-origin veteran civil servant, was appointed as Singapore’s acting President until a new head of state is sworn in later this month.

Pillay, chairman of the Council of Presidential Advisers (CPA), will act as the President until after polling day on Septemeber 23.

This is the first time the office has fallen vacant since the elected presidency was introduced in 1991.

Prior to joining as Election Commissioner, Shri Arora was serving as Director General (DG), M/o Corporate Affairs since 15th December, 2016 after his superannuation.

A renowned economist, he replaces Shri Arvind Panagariya as the head of the premier think tank of the country.