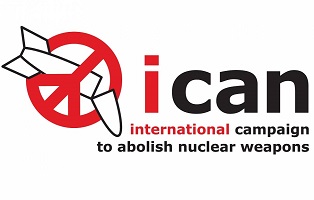 The Ministry of Women and Child Development will be celebrating the Beti Bachao Beti Padhao Week from 09th to 14th October, 2017.

The week is being celebrated in view of the International Girl Child Day on 11th October, 2017.

The theme of the program will be “Beti Bachao Beti Padhao Week – The Daughters of New India”.

The scheme is aimed at promoting gender equality and the significance of educating girls.

The Nobel Peace Prize has been awarded to the International Campaign to Abolish Nuclear Weapons (Ican).

Ican has been chosen for its “groundbreaking efforts to achieve a treaty prohibition” on nuclear weapons.

Ican, a coalition of hundreds of non-governmental organisations (NGOs), is 10 years old and is based in Geneva, Switzerland.

Ican set about an alternative approach – to raise popular awareness of the issue and to pressure governments to open up a new treaty for signature earlier this year that would seek an outright ban on nuclear weapons.

India and South Africa are celebrating Celebrating 20 years of Cooperation in the field of Science and Technology.

At this occasion both countries have renewed various agreements.

Relations between the two sides in science and technology dates back to 1995, when they signed a bilateral agreement.

14th India-EU Summit were signed by India and – European Union

The 14th annual Summit between India and the European Union (EU) was held in New Delhi on 6th October 2017.

The wide-ranging cooperation under the India-EU Strategic Partnership reviewed by the leaders.

India and the European Union leaders reaffirmed their commitment to further deepen and strengthen the India-EU Strategic Partnership.

This is based on shared principles and democracy, freedom, rule of law and respect for human rights and territorial integrity of States values.