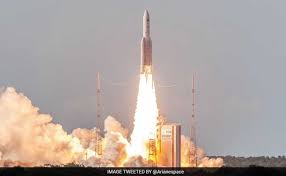 The Union cabinet approved the amendments to the HIV Bill, granting stronger protection to the country’s HIV community.

This Bill is to prohibiting discrimination against them in accessing healthcare, renting houses, jobs, or educational institution in public or private sector.

The GSAT-18 Weighs 3404 kg which carries 48 communication transponders. It will providescontinuity on operational satellites in C-bands, Extended C, Ku bands.

The designed in orbit operational life of GSAT-18 is about 15 years.

India is hosting the first BRICS U-17 Football tournament. It is being held in Goa. It will be played among the BRICS countries Brazil, Russia, India, China and South Africa.

MoU between India and European Union on Water Cooperation

The union cabinet has given its approval for the signing of MoU between India and European Union in the field of water resources.

The MoU aims to identify the key environmental issues and approaches to sustainable development and it will mutually beneficial to strengthen and further develop cooperation between India and EU in the field of water management.

The Ministry of Water Resources, River development and Ganga Rejuvenaion has been envisaging bilateral cooperation with other countries to adopt their experienced good polices to develop the country’s water resources management. Keeping in view the success of European Union in distribution of water resources, water pricing, water use efficiency by encouraging agricultural practices necessary to protect water resources and quality, after they have been decided to have an agreement with Israel to benefit from their experience and expertise.

MoU between India and AARDO

The Union cabinet approved to the signing of MoU between India and African Asian Rural Development Organisation (AARDO) for capacity building programmes in the field of rural development.

It is an autonomous, inter-governmental organisation established in 1962 with its headquarters in New Delhi.

Its objective is to promoting co-operation among African – Asian region in the direction of eradicating thirst, hunger, illiteracy, diseases and poverty in the region. India is one of the founder members of the organization.

He is renowned space scientist started his career in 1960. In 1970 undertook the responsibility for the establishment of satellite technology in India, In 1975, Under his guidance, 1st Indian satellite ‘Aryabatta’ was designed followed with 20 satellites were designed, fabricated and launched.

Earlier in 2013, Prof.Rao was inducted into the “satellite Hall of Fame” Washington by the “Society of Satellite Professional International”.