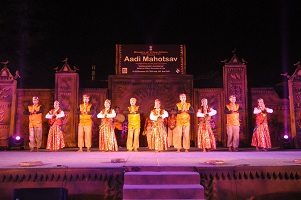 The Supreme Court has requested all States and Union Territories to move forward towards a nationwide ban on the use of pet coke and furnace oil to power up industries, in a bid to fight pollution.

The Environment Bench of the Supreme Court had already ordered a ban on the industrial use of pet coke and furnace oil in the States of Uttar Pradesh, Haryana and Rajasthan on October 24.

Automobile fuel — petrol and diesel — has 50 parts per million (PPM) of the highly dangerous sulphur.

It is a fortnight long tribal festival on the theme of ‘A Celebration of the Spirit of Tribal Culture, Cuisine and Commerce’ which is being held at Delhi.

More than 750 tribal artisans and artisans from over 25 states are taking part in the festival.

The Mahotsav will feature exhibition-cum-sale of tribal handicrafts, art, paintings, fabric, jewellery and much more.

Sibi George – Ambassador of India to the Principality of Liechtenstein

Sibi George has been appointed as the next Ambassador of India to the Principality of Liechtenstein.

Liechtenstein officially the Principality of Liechtenstein is a doubly landlocked German-speaking microstate in Central Europe.

Sibi George is an Indian Foreign Service Officer (IFS) of 1993 batch. He is presently Ambassador of India to Switzerland.

Manushi Chhillar from Haryana, is crowned as the Miss World 2017 from India.

118 contestants from all over the world competed for the crown.

This is the sixth time that India has won the Miss World, tying it for the most title wins with Venezuela.