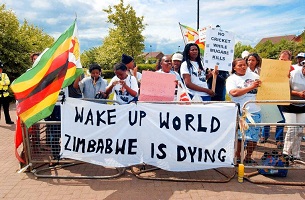 The military in Zimbabwe has launched a ‘coup’ on November 15, 2017, calling it a “bloodless correction” to target “criminals” surrounding long-time leader Robert Mugabe.

Who is Robert Mugabe?

Robert Mugabe is the only leader Zimbabwe had since it won freedom from British colonial rule in 1980.

At 93, Mr. Mugabe is the world’s oldest head of state. His poor health has fueled a bitter succession battle as potential replacements jockey for position.

His lengthy rule has been marked by brutal repression of dissent, mass emigration, vote-rigging and economic collapse since land reforms in 2000.

Although the situation is still unfolding, there is a strong possibility that this is the beginning of the end for Mugabe’s rule and his status as the world’s oldest serving president.

This was the day on which the Press Council of India started functioning in 1966.

Since the year 1997 Seminars have been organized by the Press Council on the occasion of National Press Day.

Climate Change Performance Index (CCPI) 2018 has been released. The report was made public on the sidelines of the UN Climate Change negotiations (COP23) in Bonn.

The Climate Change Performance Index (CCPI) is an instrument covering 58 countries and supposed to enhance transparency in international climate politics.

Its aim is to encourage political and social pressure on those countries which have, up to now, failed to take ambitious actions on climate protection as well as to highlight countries with best-practice climate policies.

India is ranked 14th, an improvement from its 20th position last year.

The bottom three of the index is formed by Korea (58), Iran (59) and Saudi Arabia (rank 60), all of which are showing hardly any progress or ambition in reducing its emissions and energy use.

Highlights of the report:

As per the report, fifty-six countries and the EU are together responsible for about 90% of global greenhouse gas emissions.

The report notes that global energy transition is taking up speed but no country is doing enough. For this, the countries have to strengthen targets and implementation.

This is the first Miss International title for Indonesia. Kevin Lilliana has won the crown beating 68 candidates from across the world.

National Awards for Excellence in Journalism 2017

The Vice President of India, Shri M.Venkaiah Naidu, attended the function organized by the Press Council of India on the occasion of National Press Day.

The occasion marked the Valedictory of Golden Jubilee Celebrations of Press Council of India.

Vice president of India given the National awards for Excellence in Journalism 2017.