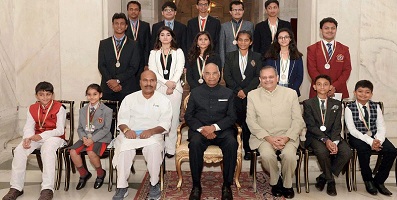 The main objective of this year’s campaign is to promote the importance of affordable and equitable access to medical care for all women.

Diabetes is a chronic disease or condition that is caused when the pancreas is no longer able to make insulin, or when the body cannot make good use of the insulin it produces.

Lavi Fair has been an important point of trade between India and Tibet for centuries.

The President of India, Shri Ram Nath Kovind gave away the National Child Awards 2017 on the occasion of Children’s Day in New Delhi.

The National Child Awards 2017 are given to celebrate the exceptional achievements of children; as well as to individuals and institutions who work for child welfare.

This year, the President honoured 16 children, out of which one child was given a gold medal and 15 children were given silver medals.

The National Child Awards for Exceptional Achievement are given to recognize children with exceptional abilities in fields such as academics, culture, arts, sports, music etc.

Master Akash Manoj from Krishnagiri awarded Gold medal for his contribution in the field of Innovation.

He has invented a device to detect silent heart attacks six hours prior to attack, that has the potential to   save many lives.

These awards are given to deserving institutions and individuals for their outstanding performance in the field of child development and welfare.

The awards were started with a view to recognize such voluntary action.

In this category, individuals are recognized for their outstanding contribution towards service for children, including children with disabilities.

The criterion for selection is the quality of work performed by the individual for the cause of children.

Mr. CHEZHIAN RAMU is a visionary and leader. He has done commendable work in providing care and protection to children for the last 25years.

Through his organizations ‘Terres des Home’ and ‘Core Trust’ he has been able to establish 16 homes for deprived children living below poverty line.

Under the leadership of Mr.Chezhian Ramu, many vulnerable children who have been abandoned, orphaned and infected by HIV Aids or other diseases or pushed into beggary, have been rescued and rehabilitated.

Mithali Raj – Sportswoman of the Year

Mithali Dorai Raj is an Indian cricketer and the captain of the Indian Women’s cricket team in Tests and ODI.

Children’s Day is celebrated across India to increase awareness of the rights, care and education of children.

It is celebrated on 14 November every year on the birth anniversary of the first Prime Minister of India Jawaharlal Nehru also called ‘Mama Nehru’.

But after Jawaharlal Nehru’s death in 1964, it was decided to celebrate his birthday as Children’s Day.