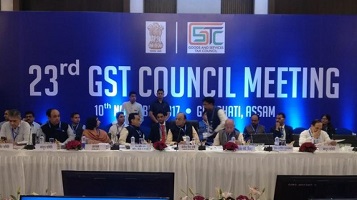 Decisions taken during this meeting of GST council has brought in a comprehensive overhaul of GST rates.

Besides return filing has been eased and more relief has been provided to small and medium enterprises.

Some of the items for which GST rate has been reduced from 28% to 18% include chewing gum, dental hygiene products, chocolate, aftershave, detergent, marble, custard powder, deodorant, nail polishes and creams.

GST is a destination-based, single indirect tax that is levied on consumption of goods or use of services across India.

India re-elected as member of UNESCO’s executive board

India got re-elected as a member of the Executive Board of the UN Educational, Scientific and Cultural Organization (UNESCO).

The executive board is the top decision- making body of UNESCO.

General Conference sets programmes and the budget of the UNESCO, elects the members of the executive board and also appoints the director-general, every four years.

Researchers in the University of Maryland in the US released the study of sulphur dioxide emitter.

The study says that, India’s emissions of the air pollutant sulphur dioxide increased by 50 % since 2007, while China’s fell by 75 %.

Sulphur dioxide is an air pollutant that causes acid rain, haze and many health-related problems.

It is produced predominantly when coal is burned to generate electricity.