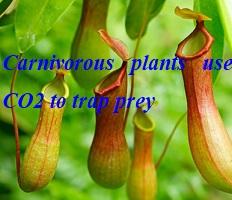 The NCTE Act, 1993 enacted by Parliament aims to achieve planned and coordinated development of teacher education system, regulation and ensure proper maintenance of norms and standards in said system.

It establishes NCTE to achieve these objectives.

The amendment will ensure that students studying in these Institutions/Universities, or already passed out from here, find employment as teacher.

The amendment will grant retrospective recognition to all such Central/State/Universities which were found to be conducting teacher education courses without NCTE permission.

Carnivorous plants have been known to employ a variety of techniques like nectar, smell, colour and ultraviolet florescence to lure and capture prey.

The Indian pitcher plant (Nepenthes khasiana) uses the gas, both to attract prey and to aid the digestive process.

The open Nepenthes pitchers were found to emit CO2 constantly.

CO2 inside the pitchers was produced by the respiration of tissues within the cavity.

CO2 is found to trigger the release of antifungal compounds into the pitcher fluid, preventing infections from incoming prey.

It might also act as a tranquilliser for the trapped prey.

Cabinet approves agreement on cooperation and mutual assistance between India and Armenia in custom matters.

The agreement will further help in the availability of relevant information for the prevention and investigation of customs offences.

It is also expected to facilitate trade and ensure efficient clearance of goods traded between both the countries.

Gender Vulnerability Index (GVI) has been compiled by ‘Plan India’ a non-government organisation and was released by Union Women and Child Development Ministry on November 1, 2017.

On parameter of ‘Poverty’, Manipur, Mizoram and Tamil Nadu are the top three states.

This is the first visit to India by an Italian Prime Minister in last ten years.

The focus of Mr. Gentiloni’s visit was to give an impetus to economic and commercial cooperation between India and Italy.

The President of India, Shri Ram Nath Kovind, inaugurated the 21st World Congress of Mental Health being organized by the World Federation for Mental Health in partnership with Caring Foundation and other institutions in New Delhi.

The World Congress of Mental Health is taking place in India for the first time.

Sixty years after the de facto transfer of French territories to India was signed in New Delhi between the two countries, Puducherry will celebrate its Liberation Day for the first time on November 1.

Puducherry formerly known as Pondicherry is a union territory of India.

Historically known as Pondicherry the territory changed its official name to Puducherry on 20 September 2006.

Together with Chandernagor, Mahe, Yanam, Karaikal and Masulipatam, it formed the French colony of French India, under a single French governor in Pondicherry.

The territories of French India were completely transferred to the Republic of India de facto on 1 November 1954, and de jure on 16 August 1962.