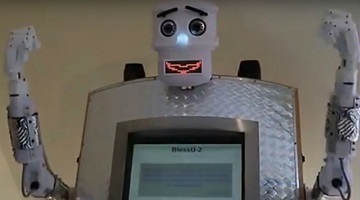 The Pakhwada was initiated by an oath taking ceremony which was attended by the officers and staff of the Department of Consumer Affairs.

The aim of the Swachhta Pakhwada observed by the Department was to spread swachhta awareness and implementation across the country with a focus on role of the Consumer in taking a leadership role for sanitation initiatives.

It is a robot priest that beams lights from its hands and grants automated ‘blessings’ to people recently launched in Germany.

Once you select whether you want the blessings in a male or female voice, the robot raises its arms, flashes lights from its hands, recites a biblical verse and says: “God bless and protect you”.

The devotee also has a choice of printing out the blessing.

A robot priest launched in Germany to mark the 500th anniversary of the start of the Reformation, reports PTI.

The Reformation was a religious revolution which took place in the Church in the 16th century.

The previous Indian PM to visit Spain was Rajiv Gandhi, in 1988.

Actress Priyanka Chopra will be honoured with the Dadasaheb Phalke Academy Award for being an International star.

She will be given the award under a newly introduced “Internationally Acclaimed Actress” Category.

She will be received the award at a ceremony in Mumbai on June, 1.

The Reserve Bank of India (RBI) will soon introduce currency notes of one rupee denomination.

The notes, which have already been printed by the Government of India, are legal offer under the Coinage Act, 2011.

The existing currency notes in this denomination in circulation will also continue to be legal tender.

The surrounding design of the note consists of a picture of ‘Sagar Samrat’, the oil exploration platform in Maharashtra.

According to India Development Report released by World Bank, India had one of the lowest female participation in the workforce, ranking 120th among 131 countries.

As per the report, the participation level has been dropping since 2005, despite having 42% women who are graduates.

Jobs for Indian women remain primarily in the agriculture sector.

The share of women in services and industry is less than 20%.

World Bank’s India Development Report said that even among countries with similar income levels, India is at the bottom, together with Yemen, Pakistan and Egypt.