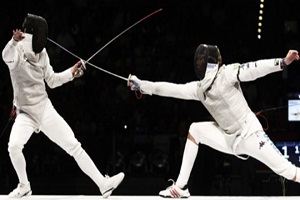 India has extended a 500 million dollar line of credit to Mauritius.

The Line of Credit has been signed between SBM Mauritius Infrastructure Development Co. Ltd and Export-Import Bank of India.

Memorandum of understanding (MoU) for setting up of a civil services college in Mauritius.

Submission of instrument of ratification of International Solar Alliance (ISA) by Mauritius.

Indian Navy frigate INS Ganga is placed in non-operational category from 28th May 2017, followed by decommissioning, after 32 years of service.

INS Ganga is a Godavari-class guided-missile frigate of the Indian Navy and was built in Mumbai by Mazagon Dock Limited.

With this win, Bhavani Devi has also become the first Indian to win a gold medal in an international fencing event.

She had previously won a silver medal.

The system is likely to intensify further into a severe cyclonic storm during next 12 hours.

It is very likely to move north-north eastwards and cross Bangladesh coast.

The Union Health Ministry has confirmed that three cases of Zika were reported from Ahmedabad in January.

The information was made public five months after the cases were reported, as the World Health Organization (WHO) has now published a ‘member state report’ on its website.

What you need to know about Zika?

Zika is spread mostly by the bite of an infected Aedes species mosquito (Ae. aegypti and Ae. albopictus).

These mosquitoes bite during the day and night.

Zika can be passed from a pregnant woman to her fetus.

Infection during pregnancy can cause certain birth defects.

There is no vaccine or medicine for Zika.

The leaders of the United States, Canada, Britain, France, Germany, Italy and Japan – countries collectively known as the Group of Seven (G7) – recently held a two-day summit in Taormina, Italy.

The bloc meets annually to discuss a wide range of issues, including global economy, security and energy.

What you need to know about G7?

The Group of Seven (G7) is an informal bloc of industrialised democracies.

Its current members make up nearly 50% of the world economy, and represent more than 60% of net global wealth.

It consists of Canada, France, Germany, Italy, Japan, the United Kingdom and the United States. EU is also represented.

He is among the nine artiste chosen for the award in theatre category.

Know about the Sangeet Natak Akademi:

The Sangeet Natak Akademi – India’s national academy for music, dance and drama – is the first National Academy of the arts set-up by the Republic of India.

It was created by a resolution of Government of India. It was set up in 1952.

The academy functions as the apex body of the performing arts in the country to preserve and promote the vast cultural heritage of India expressed in music, dance and drama.

It also works with governments and art academies in states and territories of the country.

The Akademi Awards are the highest national recognition conferred on eminent artistes.

Each year the Academy awards Sangeet Natak Akademi Fellowships, Ratna Sadsya, to distinguished individuals for their contribution to the field of arts, music, dance and theatre.

Ustad Bismillah Khan award is given to young artists for their talent in the fields of music, dance and drama.