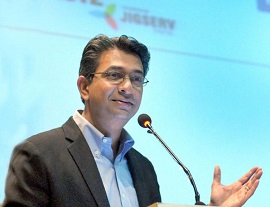 Google’s vice-president for South East Asia and India, Rajan Anandan has been appointed as the new chairman of Internet and Mobile Association of India (IAMAI).

Mr. Rajan Anandan is the Vice President and Managing Director of Google South East Asia and India and is responsible for Sales and Operations in the region.

President Pranab Mukherjee has received the first copy of two books ‘Mann Ki Baat – A Social Revolution on Radio’ and ‘Marching with a Billion’.

This book written by journalist Uday Mahurkar and it is analysing Narendra Modi’s Government at Mid-term’ at Rashtrapati Bhavan in New Delhi.

It contains a comprehensive, qualitative and academic analysis of programme – the themes, the choice of topics, the salient features.

The President of India, Shri Pranab Mukherjee presented the Dr. Ambedkar National Awards for outstanding contribution to the promotion of social understanding and for the upliftment of weaker sections of the society for the years 2011, 2012 and 2014 on May 26, 2017 in New Delhi.

The award for the year 2011 was presented to Professor S.K. Thorat on New Delhi for his contributions towards the upliftment of the downtrodden.

The award for the year 2012 was presented to Samta Sainik Dal for its extraordinary services.

The award for the year 2014 was jointly presented to Shri Babu Lal Nirmal of Rajasthan for his extraordinary contributions in upholding the rights of poor persons in rural and urban areas of Baran District and to Amar Sewa Sangam of Tamil Nadu for its extraordinary services being extended for the welfare of the marginalized population of the society including the physically and mentally challenged persons.

The Dr. Ambedkar National Award was instituted in the year 1992.

The award is given for the work done for social understanding and upliftment of weaker sections.

Selection is made on the basis of a published work or a mass movement, which has made considerable impact on the quality of life of the weaker sections of the society.

Indo-Thailand Humanitarian Assistance and Disaster Relief (HADR) Table Top Exercise 2017 is in progress at Chiang Mai, Thailand from 22 May to 26 May 17 between the Indian Air Force and Royal Thailand Air Force (RTAF).

This is second such exercise to be conducted between the two Air Forces.

The aim of the bilateral exercise is to evolve SOPs for planning and executing relief missions during unforeseen natural calamities like Tsunami, earthquakes, cyclones, floods etc.

The objective is to enhance interoperability between both the Air Forces, while conducting combined air operations triggered by a crisis.

The exercise would assist in laying down procedures and establish decision support system at various stages of relief operations.