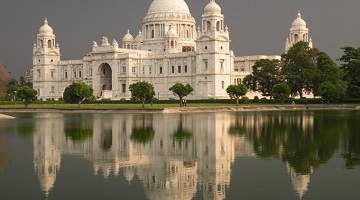 First successful transplant in the world was done in 2012 in Sweden.

In India, infertility prevalence is between 3.9%- 16.8% of the population of child bearing women.

Among the reasons, uterine factor is the cause in 20% of cases.

The uterine factor can be due to causes like congenital absence of uterus, uterine malformations, genital tuberculosis and surgical removal of uterus for cancers.

Victoria Memorial Hall (VMH) is introducing facilities of exploring its galleries at the click of a button, courtesy the Google Arts and Culture project to commemorate the occasion of International Museum Day on 18th May.

The project offers viewers a 360-degree walk through traversing the galleries, in Google Street View mode.

The galleries with The Art of Abanindranath Tagore, Gaganendranath Tagore and The Magnificent Heritage of India as seen by the Daniells can be explored.

Abanindranath Tagore was the principal artist and creator of “Indian Society of Oriental Art”.

He was also the first major exponent of Swadeshi values in Indian art, thereby founding the influential Bengal school of art, which led to the development of modern Indian painting.

He was also a noted writer, particularly for children.

His famous paintings include `Bharat Mata’, the `Passing of Shah Jahan’, the `Chandi Mangal’ collection and `Krishna Leela’.

ISRO got Indira Gandhi Prize for 2014

The Indian Space Research Organisation (ISRO) was recently presented with the Indira Gandhi Prize for Peace, Disarmament and Development for the year 2014.

The ISRO was selected for the prize in 2014 by a jury headed by Vice-President Hamid Ansari.

About Indira Gandhi Prize for Peace:

These prizes were given in the recognition of creative efforts towards promoting international peace, development and a new international economic order.

It consists of a trophy made of banded Haematite Jasper, with a portrait of the late Prime Minister Indira Gandhi in Jaipur miniature paintings, a cash award of ₹1 crore and a citation.

Named as “KARAVALI KARUNYA”, the exercise, which involves both professional exchange and actual disaster response mechanisms is set on a Tsunami disaster scenario.