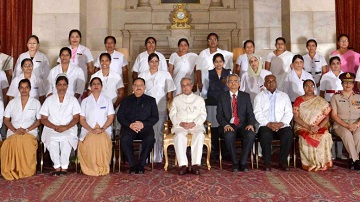 WHO Appointed Amitabh Bachchan as Goodwill Ambassador for Hepatitis

The World Health Organisation (WHO) appointed Amitabh Bachchan as its goodwill ambassador for hepatitis in South-East Asia region to boost awareness and intensify action to arrest the epidemic.

Nearly 90 million people suffer from chronic liver diseases, which are driving rates of liver cancer and cirrhosis in the region, according to the WHO estimates released this year.

As WHO goodwill ambassador for hepatitis in the region, Mr Bachchan will lend his voice and support to public awareness programmes.

This aims to scale up preventive measures and advocate for early diagnosis and treatment of viral hepatitis.

The Election Commission of India has launched National Contact Center with a toll free number- 1800111950.

This move would enable any citizen from any part of the country to call on the toll-free number and get their query or complaint addressed at any time of the day in Hindi or English.

The callers would be able to enquire on elections, voting dates, electoral roll and online registration.

Just by simply dialing the toll free number, they would be able to register their complaints.

After Sachin Tendulkar, Rahul Dravid, Sourav Ganguly and Zaheer Khan, Laxman is the fifth Indian to receive this honour.

He was awarded the Padma Shri award in 2011.

He is one of the few players who have played 100 Tests but never played in a Cricket World Cup.

Marylebone Cricket Club (MCC) is a cricket club in London, founded in 1787.

MCC has awarded Honorary Life Membership to hundreds of the finest cricketers and men and women associated with the game.

The objective of the test was to assess the Derby integration with aircraft systems on-board Tejas including the aircraft avionics, fire-control radar, launchers and Missile Weapon Delivery System and to verify its performance.

The test was conducted at the Interim Test Range (ITR), Chandipur, Odisha.

Derby is developed by Israeli defence company Rafael Advanced Defense Systems to meet the combat needs of the armed forces.

The President of India Shri Pranab Mukherjee conferred the Florence Nightingale Awards to 35 nurses from across the country on the occasion of International Nurses Day (May 13th) at the Rashrapati Bhavan.

The Florence Nightingale awards are given to the outstanding nursing personnel employed in Central, State/UTs.

Nurses working in Government, Voluntary Organizations, Mission institutions and the private institutions can apply with the due recommendation of concerned State Government.

The Florence Nightingale Awards carries Rs.50,000/- cash, a certificate, a citation certificate and a Medal.