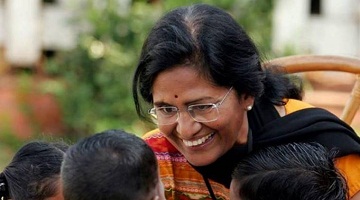 300-foot flag post, said to be the country’s second-tallest, was inaugurated at Kolhapur in western Maharashtra.

The 360-foot flag post inaugurated on March 6 at Attari on Indo-Pak border is said to be the tallest in the country.

Madhya Pradesh will be the first State to shifted to the January-December financial year from the present April-March cycle.

The change will represents the financial year will coincide with the calendar year.

Padma, daughter of former President of India, the late R Venkataraman, was honoured for her efforts in the areas of women’s welfare and rehabilitation of leprosy-affected persons for the past 30 years.

The “Avvaiyar Award” was constituted by late Chief Minister J Jayalalithaa in 2012 to honour women actively working in the areas of social reform, women’s development, culture, media, inter-faith harmony, and administration, among others.

It is a portal launched by Department of Telecom (DoT).

It allows people to track radiation emitted from mobile towers within a locality and check their compliance with the stipulated norms.

It is aimed at clearing “myths and misconceptions” about mobile towers and emissions from them.

Status of the towers will be available to the users through this portal.

Normally, government conducts test on random basis, but with this portal, test of specific tower could be done on payment.

People can check the radiation level of specific towers by paying a fee of Rs 5000 for the test to be conducted by the government.