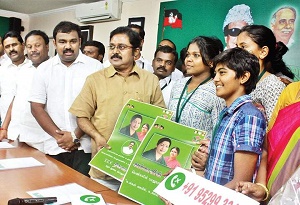 Topic : History – Appointments, who is who?

Central Water Commission is a premier Technical Organization of India in the field of Water Resources.

The Commission has the general responsibilities of initiating, coordinating and furthering in consultation of the State Governments concerned schemes for control, conservation and utilization of water resources. It also undertakes the investigations, construction and execution of any such schemes as required.

Topic : History – Appointments, who is who?

The goal of the program is to allow celebrities with a demonstrated interest in UNICEF issues to use their fame to draw attention to important issues.

This may take the form of public appearances and talks, visits to troubled regions, which draw attention from the media, and use of their political access to advocate UNICEF causes.

The cruise missile was test-fired from a mobile launcher from the Integrated Test Range (ITR) at Chandipur by Defence Research and Development Organisation (DRDO).

The two-stage missile, one being solid and the second one ramjet liquid propellant, has already been inducted into the Army and Navy.

The Conclave was organized by the Confederation of Indian Industry (CII) in partnership with the EXIM Bank of India with the support of the Ministry of External Affairs and the Ministry of Commerce & Industry, Government of India.

The app will give the user details about the nearest police station and hospital along with map details and phone number.

There is an in-built whistle, in – built call recorder and Tips icon to provide lifesaving information.