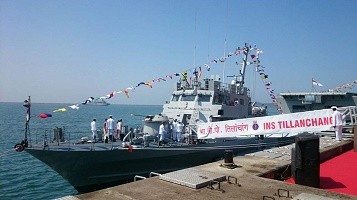 The Lok Sabha has passed the Maternity Benefit (Amendment) Bill, 2016.

Amendments made in the Maternity Benefit Act, 1961:

Maternity leave available to the working women to be increased from 12 weeks to 26 weeks for the first two children.

Maternity leave for children beyond the first two will continue to be 12 weeks.

Maternity leave of 12 weeks to be available to mothers adopting a child below the age of three months as well as to the “commissioning mothers”.

The commissioning mother has been defined as biological mother who uses her egg to create an embryo planted in any other woman.

INS Tillanchang is the third ship of four follow-on WJFAC built by the Garden Reach Shipbuilders and Engineers (GRSE) Kolkata.

The first two ships in this series are INS Tarmugli and INS Tihayu were commissioned in 2016 and are based at Visakhapatnam.

It is an ideal platform for missions like Coastal & Off-shore Surveillance, EEZ Control, Law Enforcement as well as non-military missions such as Search and Rescue, Humanitarian Assistance and Disaster Relief.

The scheme was implemented by the state government with Central assistance for the economically poor.

In the year 2016-17, concrete houses will be constructed for 50,170 beneficiaries in town panchayat limits.

“India by Nile” Festival in Egypt

The fifth edition of the “India by the Nile” cultural festival began in Cairo, Egypt on 8th March 2017.

The festival aims to strengthen the Egypt – India union and to showcase the diversity in India’s arts and culture.

It started with a Crafts Mela, which will showcase a joint handicraft exhibition of India and Egypt.

Overall, the festival is the largest foreign festival in Egypt, showcasing at least 70 events across the country.

Konkani writer Mahabaleshwar Sail has been honored with the Saraswati Samman 2016 for his novel ‘Hawthan’.

This is an annual award was instituted in 1991 for outstanding prose or poetry literary works in any 22 Indian language listed in Schedule VIII of the Constitution of India.

It is named after an Indian goddess of learning and it is considered to be among the highest literary awards in India.

He is a bilingual writer who has four Marathi dramas and seven Konkani novels to his credit.

He has also written five short stories and a novel in Marathi.