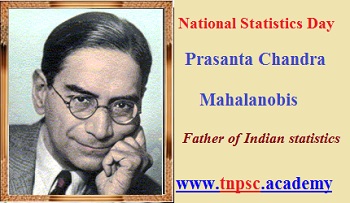 Sabarmati Ashram (also known as Gandhi Ashram, Harijan Ashram, or Satyagraha Ashram) is located in the Sabarmati suburb of Ahmedabad, Gujarat, on the banks of the River Sabarmati.

It was from his base here that Gandhi led the Dandi march also known as the Salt Satyagraha on 12 March 1930.

Present Day about this Sabarmati Ashram:

The ashram now has a museum, the Gandhi Smarak Sangrahalaya.

This had originally been located in Hridaya Kunj, Gandhi’s own cottage in the ashram.

Then in 1963, having been designed by the architect Charles Correa, the museum was built.

The Sangrahalaya was then re-located into the well-designed and well-furnished museum building and was inaugurated by Jawaharlal Nehru, Prime Minister of India on 10 May 1963.

On June 29, every year, National Statistics Day is celebrated.

In order to mark the birth anniversary of Prof. Prasanta Chandra Mahalanobis, a renowned and eminent statistician, this day was celebrated.

The Government of India, in 2007 decided to acknowledge the outstanding contributions made by Prof. P.C. Mahalanobis in the fields of economic planning and statistical development and hence designated 29th June as the National Statistics Day to celebrate Prof. Mahalanobis’s birth anniversary.

The very first National Statistics Day was celebrated on 29th June, 2007 and this year 29th June 2016, marks its 10th anniversary.

Prasanta Chandra Mahalanobis was an Indian scientist and applied statistician from Bengal.

He is the father of Indian statistics.

He is best remembered for the Mahalanobis distance and a statistical measure.

He was being one of the members of the first Planning commission of free India.

He made pioneering studies in anthropometry in India.

He founded the Indian Statistical Institute, and contributed to the design of large-scale sample surveys.

The objective of this training programme is to improve the public service delivery mechanism and provide citizen centric administration.

What you need to know about COMMIT?

The COMMIT programme, developed by Department of Personal and Training (DoPT) in collaboration with United Nations Development Programme (UNDP).

It is being organized for newly recruited state Government officials to develop in them Generic & Domain specific competencies.

The programme will cover approximately 74,000 State Government officials in the financial year 2017-18.

COMMIT will be launched in 6 States of Assam, Haryana, Maharashtra, Tamil Nadu, Telangana and West Bengal initially on pilot basis during the current financial year 2017-18.

And within next year it is expected to cover all India level.

The Prime Minister inaugurated the filling of Aji Dam near Rajkot under Sauni Yojana.

The Narmada water reaching the Aji dam will resolve the water suffering of the people of this city in Saurashtra region.

These Saurashtra region has been facing perennial water shortage due to deficient rains.

What is the SAUNI Yojana?