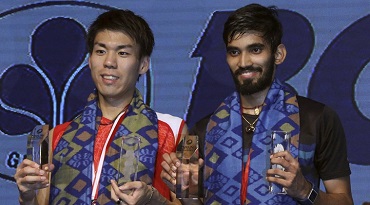 What you need to know about Global Innovation Index (GII)?

Performance of India and its neighbours:

India’s position in the 2017 Global Innovation Index has moved up six ranks from last year to 60.

The country has also proven itself to be the rising innovation centre of Asia by taking the top spot in central and southern Asia.

Switzerland, Sweden, the Netherlands, the US and UK retained their top spots as the most-innovative countries.

He defeated world no 1 Son Wan Ho of South Korea in the semifinals.

He shot to prominence by defeating Olympic Champion Lin Dan in 2014 China Open Super Series Premier in the final round.

The Garuda Purana is one of the Vishnu Puranas, which is essentially a dialogue between Lord Vishnu and Garuda (a kind of bird).

According to this book, the concept of heaven and hell are not quite the same as what we imagine them to be in popular culture today.

Garuda Purana in one of its many chapters defines the nature of punishment that is prescribed for sinners of the extreme kind that inhabit middle earth.

All India Kashiraj Trust, which was inaugurated by the first President, Dr. Rajendra Prasad to preserve and propagate our ancient texts.

The report of the ‘One Family at a Time’ study by the UN International Fund for Agricultural Development (IFAD) has been released.

This report is about the foreign remittances.

The study is the first-ever of a 10-year trend in migration and remittance flows over the period 2007-2016.

India has become the top remittance-receiving country surpassing China in 2016.

80% of remittances are received by 23 countries, led by India, China, the Philippines, Mexico and Pakistan.

The top 10 sending countries account for almost half of annual flows, led by the US, Saudi Arabia and Russia.

Pakistan won the maiden ICC Champion Trophy beating India by 180 runs in the final at The Oval.

Pakistan’s Hasan Ali was announced the Player of the Series.