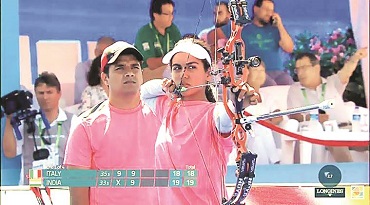 India to be Co-Partner Country in ANUGA 2017

India has signed the Memorandum of Understanding for Participation in the ANUGA Exhibition.

ANUGA is the world’s biggest and most important trade fair for Food and beverage trade.

India has second highest number of obese children in world

India has the second highest number of obese children in the world after China.

According to the recent study, 14.4 million kids in the country have excess weight.

Globally, over two billion children and adults suffer from health problems related to being obese, and an increasing number die from these conditions.

Among the 20 most populous countries, the highest level of obesity among kids and young adults was in the US at nearly 13%;

Egypt topped the list for adult obesity at about 35%.

Lowest rates were in Bangladesh and Vietnam, respectively, at 1%.

China with 15.3 million and India with 14.4 million had the highest numbers of obese children.

The Anti-Tank Guided Missile Nag was successfully flight tested in the desert ranges of Rajasthan.

Nag is a third-generation, fire-and-forget, anti-tank guided missile developed by India’s state-owned Defence Research and Development Organisation (DRDO) to support both mechanized infantry and airborne forces of the Indian Army.

It is designed to destroy modern main battle tanks and other heavily armoured targets.

Nag can be launched from land and air-based platforms.

Panama accepted the China’s “One China Policy” and breaks ties with the Taiwan.

With this, Panama and Taiwan’s decades-old relationships would likely face fresh challenges.

Over the years Beijing has tried to choke Taiwan diplomatically in a bid to force the self-ruled island to accept itself as a part of China.

The policy states in diplomatic acknowledgement that there is only one Chinese government.

Under the policy, any country that wants diplomatic relations with mainland China must break official ties with Taipei that it considers a ‘breakaway province’.

How China has been trying to choke Taiwan in recent years?

After Tsai came to power last year, China had cut official communication channels with her government in a bid to pressure her to accept that Taiwan is part of China.

Dhayal is a student of Army Public School and she is from Pune.

He is from Ghanta Ghar, Delhi.

At the 2014 Asian Games at Incheon, he won the gold medal in the men’s compound archery team event along with Rajat Chauhan and Sandeep Kumar.

In the same Asian Games, he won the silver medal in the men’s individual compound event.