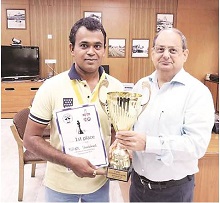 The contract for building 109-km road connecting Paletwa river terminal to Zorinpui in Mizoram border has been awarded by the government.

The construction is expected to start after the monsoon in October.

India entered a framework agreement with Myanmar for Kaladan project in 2008.

Construction began in 2010 with a deadline in June 2015. But, no headway was achieved on the road project.

Inadequate fund allocation and planning failure were seen as major reasons for the delay.

The Kaladan project connects Sittwe Port in Myanmar to the India-Myanmar border.

The project was jointly initiated by India and Myanmar to create a multi-modal platform for cargo shipments from the eastern ports to Myanmar and to the North-eastern parts of the country through Myanmar.

It is expected to open up sea routes and promote economic development in the North-eastern states, and also add value to the economic, commercial and strategic ties between India and Myanmar.

This project will reduce distance from Kolkata to Sittwe by approximately 1328 km and will reduce the need to transport good through the narrow Siliguri corridor, also known as Chicken’s Neck.

Nadal now has 15 Grand Slam titles in his career, trailing only Roger Federer, who has 18. The victory lifts Nadal’s tennis ranking back up to No. 2 in the world.

Rafael Nadal set a record winning his 10th French Open title. No other player has ever won 10 championships at the same event on 11th June 2017.

He was born on 3rd June 1986 and called as “The King of Clay“, and he is a Spanish professional tennis player.

Rafael Nadal was named the Laureus World Sportsman of the Year in 2011.

NITI Aayog started with an aim to initiate the transformation in the education and health sectors and also aims to address the need for technical support from NITI Aayog towards the states.

NITI defined a three-stage process – presentations by the states, expression of interest and assessment of commitment to health sector reforms.

Out of these fourteen states, five were shortlisted and subsequently, three will be selected on the basis of objective assessment and further evaluations.

After the signing of MoUs, the program will be launched in the three selected states.

Mr. Sarkar, a CPI(M) leader, has won the Assembly elections six times. He left the CPI(M) in 2008 over differences with senior leaders and joined the Congress in 2010. He rejoined CPI(M) last year.

Scientists have discovered the most complete specimen of a tiny dinosaur-era bird.

This tiny bird trapped in 98-million-year-old amber, which has exceptionally well-preserved feathers, talons and other features.

This tiny bird excavated from a mine in Myanmar, the piece of amber holds the specimen of a group of extinct toothed birds called Enantiornithines.

Enantiornithines died out at the end of the Cretaceous period (about 145 million to 65.5 million years ago).

Amber is fossilized tree resin, which has been appreciated for its color and natural beauty since Neolithic times.

Much valued from antiquity to the present as a gemstone, amber is made into a variety of decorative objects.

Amber is used in jewelry.

Shashikant Kutwal, a railway employee with Pune Division, has won the gold medal at the 17th World Individual Chess Championship for differently-abled, held in Slovakia.

Kutwal native place is Baramati taluka in Pune district of state of Maharashtra.

Kutwal was appointed with the Central Railway through sports quota in 2000.

Since then, he has been representing Central Railway, Indian Railways and India at various chess competitions.