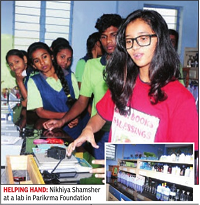 Astana, the Kazakhstan capital is hosting the two-day summit of the Shanghai Co-operation Organization (SCO).

India and Pakistan have joined SCO as full members on 9 June 2017 in Astana, Kazakhstan.

The Shanghai Cooperation Organisation (SCO) is a Eurasian political, economic, and security organization.

SCO was established on 15 June 2001 in Shanghai by the leaders of China, Kazakhstan, Kyrgyzstan, Russia, Tajikistan, and Uzbekistan.

The next summit of the organization would take place in 2018 in China.

The world’s oldest fossil mushroom which was above age of 115 million years has been discovered in Brazil.

The mushroom has been named Gondwanagaricites magnificus and belongs to the Agaricales order.

The role and status of BRICS countries has been consistently strengthening and increasing.

The contacts between media are an important basis for friendship, trust and mutual cultural exchange between the countries.

During an inaugural session of the BRICS Media Forum in the Chinese capital, Cai Mingzhao, president of Xinhua News Agency and executive president of the Forum, announced that the news agency will invest $1 million for boosting media cooperation in the five-nation grouping.

They defeated their German-Colombian opponents Anna-Lena Groenefeld and Robert Farah in the final.

Bopanna has become only the fourth Indian to win a Grand Slam crown, after Leander Paes, Mahesh Bhupathi and Sania Mirza.

Nikhiya Shamsher, a student from Bengaluru recently received ‘The Diana Legacy Award’ from The Duke of Cambridge, Prince William and Prince of Wales, Prince Harry for her exemplary achievement of providing quality education to the underprivileged.

She was awarded at a grand event at St James Palace in London recently.

She was the only Indian to won the award from amongst 12,000 nominations received from all over the world.

At 14, Nikhiya already has a registered NGO; she has conducted campaigns like ‘Bags, Books and Blessings’ and ‘Yearn to Learn Labs’.

She set up the NGO to ensure that every child has equal opportunities to learn and become successful in life and be provided with basic necessities.

“The Diana Legacy Award” celebrates the achievements of outstanding young leaders, visionaries and role models from across the world who are selflessly transforming the lives of others.