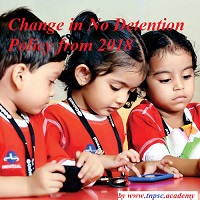 Jigyasa, a student- scientist connect programme has officially been launched in Delhi.

Council of Scientific and Industrial Research (CSIR), has joined hands with Kendriya Vidyalaya Sangathan (KVS) to implement this programme.

The focus is on connecting school students and scientists so as to extend student’s classroom learning with that of a very well planned research laboratory based learning.

India has dropped by one spot to become the fourth-largest foreign investor into the UK.

US topped the list with 577 projects in the UK. China ranked the second top investor in the UK with the 160 projects.

India shares the fourth spot with Australia and New Zealand, which also set up 127 projects collectively.

The government has decided to do away with the no-detention policy for students from the next academic session.

Due to the quality of education has spoiled because of this policy, most states in India recommend to change in the “No Detention Policy”.

So that, government has also accept and decided to make some changes in that policy.

No-detention policy, a key component of the Right of Children to Free and Compulsory Education Act, 2009, was introduced with the intention of ensuring that every child aged between 6 and 14 received elementary education.

What is the issue:

However, many state government said that promoting students automatically to higher classes till Class VIII has made their performance poor.

The issue was first taken up for discussion in August 2015 during the Central Advisory Board for Education (CABE) meeting in which education ministers from 19 States, excluding Tamil Nadu, participated.

Though it was unanimously decided in the meet to revoke the said policy, the Centre gave an assurance that states will decide if they wanted to continue with the policy or not.

However, in April 2017, RTE (Amendment) Bill was introduced in the Lok Sabha proposing to scrap the policy.

The Union minister for human resources development Mahendra Nath Pandey said that the proposal will come into effect from academic year 2018-19.

Tamil Nadu is one of the two states that have been opposing this move since 2015. Telangana too had objected.

Guruswamy Jayraman, a Glenwood resident who migrated from Delhi to Australia in 1991, has been awarded Order of Australia for community work.

Order of Australia is the highest civilian award in Australia.

He works as a senior accountant with Woollahra Municipal Council for a living and has been devoting most of his spare time in community work for the last 25 years.