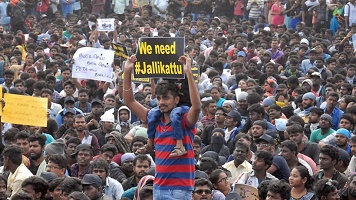 National Bravery Awards for the year 2016 were presented by the Prime Minister to the 25 children from various part of the country.

The Indian Council for Child Welfare (ICCW) has been giving the National Awards for Bravery every year to children since 1957.

The main objective of the awards is to give due recognition to children who perform acts of bravery and inspire other children to follow their example.

In addition, ICCW provides financial assistance under its Indira Gandhi Scholarship Scheme to those undertaking professional courses such as engineering and medicine.

For the others, this assistance is provided till they complete their graduation. The Government of India has reserved some seats for the awardees in medical and engineering colleges and polytechnics.

Prevention of Cruelty to Animals (Tamil Nadu Amendment), Act, 2017 was passed by the Tamil Nadu Assembly on 23 January 2017 to replace an ordinance promulgated two days before to allow Jallikattu in the state.

The Amendment Bill also seeks to amend the Prevention of Cruelty to Animals Act, 1960.

Subscribe our Newsletter to get Daily TNPSC Current Affairs Jan 24, 2017 in English and Tamil on your Inbox.