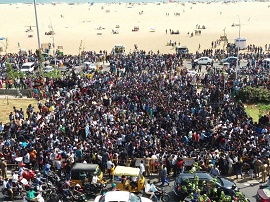 Jallikattu is also known as Eruthazhuvuthal or Manju virattu. In Tamilnadu, Jallikattu is a traditional bull-taming sport organized during Pongal.

Bos Indicus bull, commonly known as Kangeyam breed is released into a crowd of people and multiple human participants attempt to grab the large hump of the bull with both arms and hang on to it while the bull attempts to escape.

Participant hold the hump for as long as possible, attempting to bring the bull to a stop and also ride long enough to remove flags on the bull’s horns.

The Animal Welfare Board of India filed a case in the Supreme Court of India for an outright ban on Jallikattu because of the cruelty to animals and the threat to public safety involved.

The supreme court said  that “The bulls cannot be allowed as performing animals, either for Jallikattu events or bullock-cart races in the state of Tamil Nadu, Maharashtra or any other place in the country.”

In 2016, the Environment Ministry has declared that the sport could continue despite the existing ban.

But Animal welfare organization such as People for the Ethical Treatment of Animals (PETA) are opposing this Jallikattu in Tamilnadu.

What is this ban doing in Tamil Nadu?

Some groups conducted a rally and prayer against the supreme court ruling.

Following the protests at Chennai, many students started rallies in various towns of Tamil Nadu.

Dharamshala has situated near the Shimla, which has a unique significance and history of its own.

2016 was the Warmest year in India

Indian Meteorological Department reported the 2016 was the warmest year in India, which is weather conditions in the year were warmer than usual.

A new form of hydrogen formed by the Physicists

It is a previously unseen form of hydrogen. For the past forty years, existence of hydrogen in ion clusters was known and is positively-charged clusters.

Subscribe our Newsletter to get Daily TNPSC Current Affairs Jan 21, 2017 in English and Tamil on your Inbox.