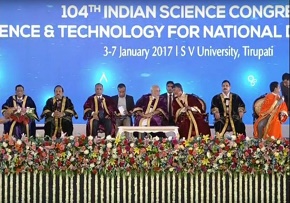 The President has appointed the one of the member of the UPSC Prof. David R. Syiemlieh, as the Chairman of Union Public Service Commission. This commission consists of a chairman and ten members.

Articles 315 to 323 of the Constitution deal with the appointment of UPSC members, powers and functions of the UPSC. As per article 319, the Chairman of UPSC is not eligible for further employment either under Govt of India or a State.

Theme of this Event : “Science and Technology for National Development”.

In order to strengthening the scientific research in the country and make the India as world’s top in the field of Science and Technology.

Prime Minister also inaugurated “Pride of India” exhibition as a part of the Science Congress.

In order to help through provide medical treatment to the people of the Above Poverty Line, the Arogya Raksha Scheme was launched by the Chief Minister of Andhra Pradesh, Chandrababu Naidu.

The Arogya Raksha Scheme would provide health insurance coverage to about 35 Lakh Above Poverty Line families in the state.

Subscribe our Newsletter to get Daily TNPSC Current Affairs Jan 03, 2017 in English and Tamil on your Inbox.