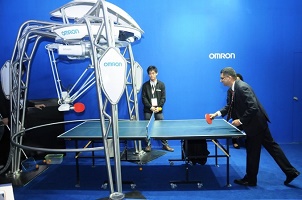 Munnar forest officials spotted the two critically endangered several species of which have very beautiful flowers on the boundaries of the Eravikulam National Park.

They are included in the critically endangered category of IUCN (International Union for Conservation of Nature).

The world’s first robot table tennis tutor in Japan has set a new Guinness World Record for its uncanny ability of being able to play the game better than most humans.

FORPHEUS (Future Omron Robotics Technology for Exploring Possibility of Harmonised automation with Sinic Theoretics) has officially been given the Guinness title for its unique technological intelligence and educational capabilities.

The machine is easily able to act as a coach and also features an array of cameras that are situated above the ping pong table which monitors the position of the ball at an impressive rate of 80 times per second.

This functionality also allows the robot to show its human student to see a projected image as to where the return ball will land so that they may improve their skills.

According to New World Wealth report, Mumbai is the richest city in the country.

Delhi and Bengaluru in the second and third place, respectively.

Mumbai, which is home to 46,000 millionaires and 28 billionaires, is the richest Indian city with a total wealth of $820 billion.

Black rhinos on the brink of extinction

The species has lost 70 % of its genetic diversity.

Two centuries ago, the black rhinoceros, which roamed much of sub Saharan Africa had 64 different genetic lineages. But today only 20 of these lineages remain.

The species overall is classified as critically endangered, and three subspecies, one including the western black rhinoceros, were declared extinct by the International Union for Conservation of Nature (IUCN) in 2011.

Subscribe our Newsletter to get Daily tnpsc current affairs feb in English and Tamil on your Inbox.