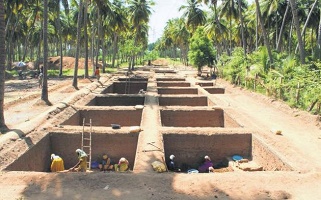 Farmers whose rain dependent lands will get Rs 3,000 per acre and Rs 5,465 per acre to farmers who have lands which are dependent on irrigation.

Grant subsidy to one lakh working women every year for the purchase of mopeds or scooters.

Construction of 5000 houses for the fishing community at a cost of ₹1.7 lakh per house.

Doubling of the amount offered as unemployment assistance.

The Central Government has allowed the further excavation in Keezhadi, where archaeologists have unearthed the biggest habitation of Sangam era, dated between 300 BC and 1000 AD.

The government has did not give permission for excavation. And now parliament discuss about this issue and granted the permission.

The “Saathiya Resource Kits” is a nation wide programme under which 1.6 lakh boys and girls will work as peer educators to adolescents and respond to their queries on key health issues including mental and physical changes, nutrition and addiction.

The resource kit comprises of an Activity Book, Bhranti-Kranti Game, a Question-Answer Book and a Peer Educator Diary.

To address the health and development needs of the country’s adolescents, Health Ministry had launched RKSK in January 2014.

Nagaland Former Chief Minister T R Zeliang resigned from the post on February 19, 2017 facing revolt from his party MLAs against the decision to reserve 33% seats for women in urban local bodies.

The Ahmedabad-based Entrepreneurship Development Institute of India (EDII), has received the International Mercury Awards (IMA) for the year 2016-17.

EDII is chosen for best overall presentation of its 2015-2016 annual report for entrepreneurship education, research, training and institution-building.

Shaunak has been designed and built indigenously by Goa Shipyard Ltd that can carry one twin engine light helicopter and five high speed boats.

Subscribe our Newsletter to get Daily TNPSC current affairs feb in English and Tamil on your Inbox.