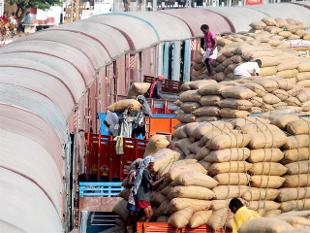 Gujarat established a cashless distribution of food grain. So, Gujarat becomes the first state in the country to introduce this system in food grains.

The customers under NFSA (National Food Security Act) will need to carry only Aadhaar cards for getting their food grain in Gujarat.

Gujarat government for installing Aadhaar Enabled Payment System in many Fair Price Shops (FPS) much before the target, March 31.

Arunachal Pradesh has become the first state in the northeast to implement e-Cabinet solution for the state cabinet members.

The entire business of the Cabinet can be conducted using the e-Cabinet solution.

The e-Cabinet solution will give remote access to the Ministers to view Cabinet notes and the same will be circulated well in advance for proper analysis and feedback.

Once Arunachal Pradesh adopts the e-Cabinet system fully, the average length of the cabinet meetings will go down from 4-5 hours to just 30-90 minutes and the government can also eliminate the need to print and deliver thousands of pages of documents.

Implementation of the programme:

To ensure equitable geographical reach, each of the 250,000 Gram Panchayats would be expected to register an average of 200-300 candidates.

Significance of this programme:

As per the 71st NSSO Survey on Education 2014, only 6% of rural households have a computer.

This highlights that more than 15 crore rural households do not have computers and a significant number of these households are likely to be digitally illiterate.

This would empower the citizens by providing them access to information, knowledge and skills for operating computers / digital access devices.