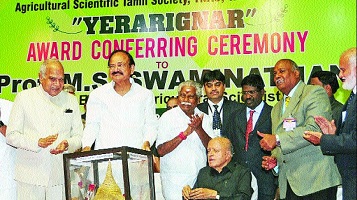 India is hosting the 2017 edition of “Bodhi Parva: BIMSTEC Festival of Buddhist Heritage” in New Delhi as part of celebrations of 20th Anniversary of BIMSTEC.

To emphasise and raise awareness of this rich and common heritage and mark the 20th anniversary of this unique organisation group, a BIMSTEC Buddhism Festival ‘’Bodhi Parva: BIMSTEC Festival of Buddhist Heritage” has been celebrated.

The universal message of peace and tolerance practiced by Buddhism can address the growing sense of inadequacy in the face of changes and conflicts that people and the world face.

BIMSTEC has a deep connect with Buddhism, which originated in South Asia and then travelled and rooted itself in South East Asia. Buddhism constitutes a bridge between South and South-East Asia.

Eminent Hindi writer Mamta Kalia will be honoured with literary award Vyas Samman for year 2017 for her novel “Dukkham Sukkham”.

The Vyas Samman is given to a Hindi literary work published in the past 10 years. Eminent literary critic and poet Ram Vilas Sharma is the first recipient of this award in 1991.

Kacheguda has earned the distinction of being the first energy-efficient ‘A1 Category’ railway station in the country.

Kacheguda Railway station is a historic building and had completed 100 years.

India’s one and only ISO 9000 certified home – Chennai

The Surana family in Chennai has acquired an ISO 9000 certification. This is the India’s one and only ISO-certified household.

The eldest member of the family, the grandfather, has been named the ‘household head’.

The other members of the family, the father and the children are designated as the ‘permanent customers’.

If you’re visiting the Suranas, you will most likely be termed ‘temporary customers’ and will be served a customer feedback form along with your cup of tea, wherein you can respond with the level of satisfaction with the hospitality and the food.

The ISO 9000 family of quality management systems standards is designed to help organizations ensure that they meet the needs of customers and other stakeholders while meeting statutory and regulatory requirements related to a product or program.

ISO 9001 deals with the requirements that organizations wishing to meet the standard must fulfill.

Eminent scientist and ‘Father of DNA finger printing in India’, Lalji Singh has passed away.

Singh also worked in the areas of molecular basis of sex determination, wildlife conservation forensics and evolution and migration of humans.

In 2004, he received the Padma Shri in recognition of his contribution to Indian science and technology.

The Vice President of India, Shri M. Venkaiah Naidu given the ‘Yeraringan’ Award to Prof. M.S. Swaminathan, in Chennai.

Prof. Swaminathan was a living legend who has done India proud with his extraordinary vision, commitment and pragmatism.

Mankombu Sambasivan Swaminathan is an Indian geneticist and international administrator, renowned for his leading role in India’s Green Revolution a program under which high-yield varieties of wheat and rice seedlings were planted in the fields of poor farmers.

Swaminathan is known as “Indian Father of Green Revolution” for his leadership and success in introducing and further developing high-yielding varieties of wheat in India.

He is the founder and chairman of the MS Swaminathan Research Foundation.

His stated vision is to rid the world of hunger and poverty.

Swaminathan is an advocate of moving India to sustainable development, especially using environmentally sustainable agriculture, sustainable food security and the preservation of biodiversity, which he calls an “evergreen revolution”.

Powered by Convert Plus