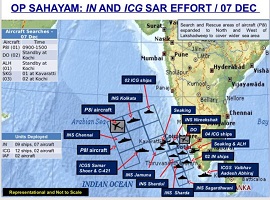 The Armed Forces Flag Day or the Flag Day of India is a day dedicated to India towards collection of funds from people of India for the welfare of the Indian Armed Forces personnel.

It has been observed annually in India on December 7 since 1949.

Over the years, it has become a tradition to commemorate this day as an honour to the soldiers, sailors and airmen of India.

It handled 36,526 Metric Tonnes of thermal coal at the berth NCB-I from the vessel MV. Asian Champion.

Shri I. Jeyakumar, Chairman of V.O. Chidambaranar Port Trust said that this Port is continuously striving to achieve improvement in performance and productivity in order to attract more volume of traffic.

The missile was targeted from Launch Complex-III at ITR Chandipur.

The radars, telemetry and electro-optical systems along with coast have tracked and monitored all the technical parameters of the missile.

The missile would soon be initiated into the Indian army as Short Range Surface to Air Missile.

The UNICEF has released the report on air pollution titled- ‘Danger in the air: How air pollution can affect brain development in young children’.

The report has once again set alarm bells ringing about high levels of air pollution and its likely impact on brain development among infants.

Highlights of the report:

These babies are at a risk of suffering brain damage. Air pollution-related ailments has led to the deaths of over 920,000 children under the age of five every year.

Nearly 16 million infants belong to Asia. Moreover, 75% of them live in the Indian subcontinent, which has three of the world’s 10 most populations countries in the world — India, Bangladesh and Pakistan.

In fact, India topped the list of countries with babies at risk, followed by China, the most populated country in the world.

Solutions offered by the UNICEF:

The UNICEF report urged citizens, especially in the developing world — South Asia and China — to be aware of the quality of air they breathe, and protect children from exposure to unhealthy air through protective masks or air filtration systems.