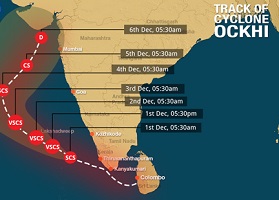 The Hornbill Festival is a celebration held every year from 1 – 10 December, in Nagaland, Northeast India.

It is also called the ‘Festival of Festivals’.

The Hornbill Festival is the perfect showcase of rich Naga culture and traditions, preserved over the years in the form of music, dance and food.

The aim of the festival is to revive and protect the rich culture of Nagaland and display its extravaganza and traditions.

The deep depression which had formed in the Bay of Bengal near Kanyakumari district in Tamil Nadu, bordering Kerala, has now intensified into a cyclonic storm named Ockhi.

The name Ockhi was given by Bangladesh which in Bengali means ‘eye’.

How are cyclones named?

The World Meteorological Organisation (WMO) and the United Nations Economic and Social Commission for Asia and the Pacific (ESCAP) started the tropical cyclone naming system in 2000.

Tropical cyclones are named to provide ease of communication between forecasters and the general public regarding forecasts, watches, and warnings.

Cyclones in the North Indian Ocean basin are named by the Indian Meteorological Department and the first tropical cyclone was named in 2004 as Onil (given by Bangladesh).

One name from each country is picked in an order to name the cyclones.

The previous storm Mora that caused severe flooding across Northeast India in May was named by Thailand.

Mora is the name of one of the healing stones and also means star of the sea.

The next cyclone will be named Sagar — a name given by India.

The objective of the exercise was to ascertain preparedness of the Indian Coast Guard, resource agencies and other stakeholders in responding to a major oil spill in line with the provisions of NOS-DCP (National Oil Spill Disaster Contingency Plan).

Indian Coast Guard is responsible for marine environment protection in the maritime zones of India and is the coordinating authority for response to oil spills in Indian waters.

The objectives of the plan are:

To develop appropriate and effective systems for the detection and reporting of spillage of oil.

To ensure that adequate protection is provided to the public health and welfare, and the marine environment.

To ensure that appropriate response techniques are employed to prevent, control, and combat oil pollution, and dispose off recovered material in an environmentally accepted manner.

To ensure that complete and accurate records are maintained of all expenditure to facilitate cost of recovery.

The World AIDS day was noticed across the world on 1st December 2017 with the theme ‘My health, my right’.

This year, the United Nations also inaugurated a campaign #myrighttohealth with the main objective on the right to health.

The crusade along with this year’s theme focuses spread awareness about ‘Right To Health’ of everyone, everywhere.

And, right to health is related to a wider set of rights.