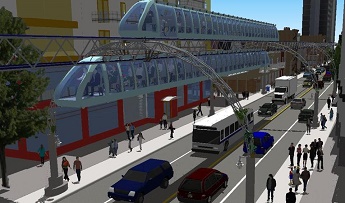 The proposal of Ministry of New & Renewable Energy (MNRE) for ratification of ISA’s Framework Agreement by India with France was approved by the Union Cabinet.

On 21st meeting of UN on Climate Change, ISA was launched jointly by the Prime Minister of India and the President of France.

In order to coordinate 121 solar resource rich nations for research, this ISA was started. But till now, 25 nations have signed the Framework Agreement.

The foundation stone of the ISA Headquarters was laid at Gwal Pahari, Guragaon in Haryana.

It is a new concept for urban mass-transit solution designed by an Indian Railway officer which won a global award at the MIT in the United States earlier this year.

About the caterpillar train:

The ‘Caterpillar Train’ is a miniature form of a train that requires only a five metre-wide road for installation, making it a suitable mode of public transport near residential areas.

Its coaches have wheels below and on top, giving it a caterpillar-like appearance.

The weight, cost and size of the coaches, apart from usage of land, is very less in comparison to a metro train.

Rajasthani Literature Satya Narayan has been selected for the Bihari Puraskar award 2016, for his Hindi book “Yeh Ek Dunia”.

In order to remember the famous Hindi Poet Bihari, for his outstanding work in Hindi or Rajasthani Bihari Puraskar Award was given since 1991.