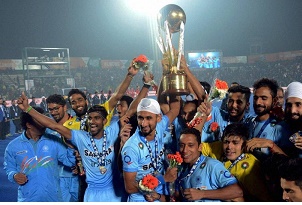 New Chiefs for Army and Navy

Lt Gen Bipin Rawat as appointed as next Chief of Army by the Government. And Air Marshal B.S. Dhanoa, presently the Vice Chief of Indian Air Force (IAF) has been appointed the next Air Chief.

Topic : History – India and its Neighbours and New Terminologies

In China, the world’s first cloned goat bearing superfine Cashmere wool was born. Cashmere wool is obtained from Cashmere goats and other types of goat.

The Cashmere fibre from the goat is less than 13.8 micrometers thick, much finer than the average of 15.8 micrometers grown by the famous Erlang Mountain goats in Inner Mongolia.

Topic : History – India and its Neighbours and New Terminologies

First fully owned satellite ground station near the North pole is used for collect data anywhere on the Earth at very fastest speed in the world launched by China.

Domestic ground stations have needed up to seven hours to download the data from satellites orbiting the Earth in the past.

But with the facility in Sweden, the maximum delay for downloading data would be less than 3.5 hours.

The shorter time is because the mapping, weather, reconnaissance and military satellites orbiting the North Pole are able to pass around the Earth about 12 times each day, while those flying over China can orbit the Earth only about five times each day.

Indian Hockey men’s team won the Hocky Junior World Cup for the second time by the 2-1 in Belgium.

Topic : India and its Neighbours and Cultural Events

This Event is used to promote crafts based bilateral relations and enhance cultural exchanges between the artisans of both countries.

The SAF was working in the field of promote and encouraging the artisans and increase the value of crafts sector of the both countries.

In order to promote health and health education in villages “Swasthya Raksha Programme” was launched by the Union AYUSH ministry.