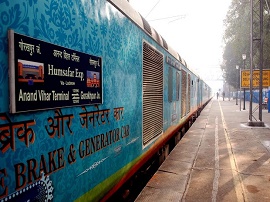 During the Railway Budget session, the government declared that Humsafar would be fully air-conditioned third AC service with an optional service for meals.

“Sustainable Action for Climate Resilient Development in Majuli” (SACReD, Majuli), this is the initiative step of Assam government to make the river island Majuli as the country’s first ever Carbon Neutral district by 2020.

SACReD the project, Majuli has been initiated to combat climate change and reduce greenhouse gas emissions.

Mitigation through forestry activities and biodiversity conservation will be the starting points for the carbon neutral agenda followed by other interventions over the next three years.

Due to the Soaring granite cliffs, urban rainforest and beaches of Rio de Janerio, it has entered the UN’s list of world heritage sites.

The UNESCO status was announced in 2012, but only became official after the Brazilian authorities were given four years to report on their plans for protecting the likes of Flamengo Park, Sugarloaf Mountain, the Corcovado, and the Copacabana beach.

Indian airmen can’t keep a beard as it is against their service rules ordered by the Supreme court.

With this, the court has upheld the sacking of an Indian Air Force (IAF) man for keeping a long beard, saying military regulations were aimed at ensuring discipline and uniformity.

In the past, the court had observed that “Religion is a fundamental right in India under Article 25 of the Constitution. But it’s subject to public order, health, morality, and all other fundamental rights. Also, what are protected were only the basic tenets of a religion and not all incidental things.”

Amendment of Rights of Persons with Disabilities Bill 2014

The Rights of Persons with Disabilities Bill 2014, which was introduced in Rajya Sabha in 2014, was cleared by the Union Cabinet with 119 amendments.