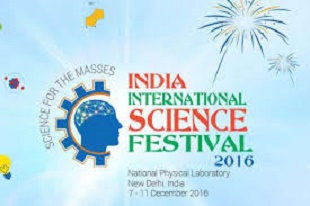 The government has launched a mobile app called “Veterans Outreach App” for an attempt to reach out Army veterans and create an interactive mechanism.

Some specific features like “Ask a question” and “Locator Services” that enable locating Ex-Serviceman Cells, ECHS Polyclinics, Station Canteens, google maps for any location and Sainik Aram Garh’s all across the country available in this Veterans Outreach App.

The App also having the facilities of “Findings Course mates” from amongst veterans who are registered on the Indian Army Veterans Portal and thereby enabling them to reconnect with old mates.

Topic : Science – Science and Technology and its new technology

India International Science Festival (IISF-2016) was the largest festival of science in this country to focus on “Science for the Masses” begin in New Delhi.

And also, won the distinction of Guinness Book of World Record for successful conduct of Largest Practical Science Lesson by 2000 school students.

In order to encourage and develop scientific temper and attitude, promote exchange of knowledge and ideas among young minds including showcasing of recent developments and contributions of India in science and technology involving all our scientific departments by IISF – 2016.

45th All India Police Science Congress at Kovalam, Thiruvananthapuram is jointly organized by the Bureau of Police Research and Development (BPR&D) and Kerala Police.

The main aim of this national event is to provide a common platform to the various police forces/units, social scientists, forensic experts and other stakeholders to deliberate on selected themes of topical interest to the Indian Police.

All India Police Science Congress will help to provide a future roadmap for all the police forces of the country.

The First All India Police Science Congress was held in 1960 at Patna.

Remembering the contribution of Dr. B R Ambedkar in the water resources management of the country, his birthday of 14th April will be celebrated as “Water Day” announced by the Union Minister.

Railway Minister launched a website of National Rail Plan, 2030 (http://www.nationalrailplan.in) aims to develop the Indian Railways in terms of service in travelling and freight across the country.

NRP-2030 will make an attempt to integrate the rail network with other modes of transport and create synergy for achieving seamless multi modal transportation network across the country.

United States of America’s President Donald Trump selected as TIME’s Person of the Year 2016 for his outstanding victory in the US election.

Subscribe our Newsletter to get Daily TNPSC Current affairs dec in English and Tamil on your Inbox.