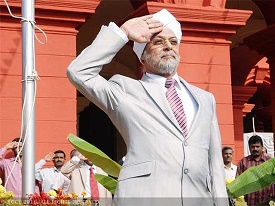 Cho made his debut in 1963 with Paar Magale Paar as comedian.

He also wrote and directed 20 plays.

Polar Satellite Launch Vehicle – C36 had 1253kg RESOURCESAT – 2A into a polar Sun Synchronous Orbit (SSO) by the ISRO.

PSLV has emerged as the workhorse launch vehicle of ISRO and is offered for launching satellites for international customers with 36 successful launches.

Carrying of arms at weddings restricted in Haryana

The Haryana state government has restricted carrying of arms at wedding functions, which has taken by Haryana govt after several incidents of celebratory firing were reported.

This arm ban in the wedding has been imposed under Section 144 of the Criminal Procedure Code.

Justice Khehar will hold the position over seven months till August 27, 2017 and he will the first Chief Justice from sikh community.