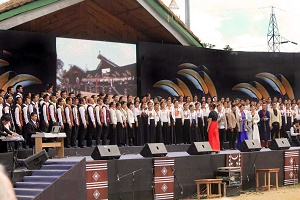 In Maharashtra, DHASAI village in Thane district has become the first cashless village in Maharashtra. Hereafter all payments are done by using swipe machines for cashless transactions.

The initiative to make this village cashless was taken by Bank of Baroda (BOB) in collaboration with NGO “Veer Savarkar Pratishthan”.

Rajendra Prasad was an eminent freedom fighter, a renowned jurist, an eloquent parliamentarian, an able administrator, a statesman par excellence and above all, a humanist to the core.

The Tribes of Nagaland in North eastern India celebrated the Hornbill Festival known as “Festivals of Festival” every year December first week in the village of Kohima.

Hornbill Festival is celebrated to promote their cultural heritage of Nagaland and named after the Indian Hornbill, the large and colourful forest bird which is displayed in folklore in the most of tribe’s.

Kolkata was honoured by the C40 Cities Awards for the world’s most inspiring and innovative cities tackling climate change.

The project aims to eradicate open dumping and burning of waste and to limit the concentration
of methane gas generated in landfill sites.[/vc_column_text][vc_column_text]

Subscribe our Newsletter to get Daily December TNPSC Current Affairs in English and Tamil on your Inbox.