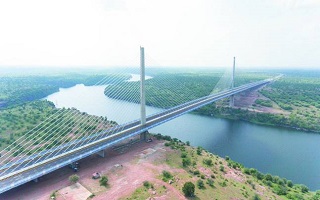 The bridge, over Chambal River, has the longest main span of 350 metre in the country and will also act as a bypass to Kota City.

The Union Cabinet has approved the Memorandum of Understanding (MoU) between India and Myanmar for the conservation of earthquake-damaged pagodas at Bagan, Myanmar.

Implementation of the project will further strengthen India’s enduring ties in culture and religion with Myanmar.

It will also contribute to India’s development partnership with Myanmar.

It will be an opportunity to showcase India’s expertise in the restoration and conservation of monuments not only to the people of Myanmar but also to the tourists from other countries.

Bagan in central Burma is one of the world’s greatest archeological sites.

The Ayeyarwady (Irrawaddy) River drifts past its northern and western sides.

From the 9th to 13th centuries, the city was the capital of the Pagan Kingdom, the first kingdom that unified the regions that would later constitute modern Myanmar.

During the kingdom’s height between the 11th and 13th centuries, over 10,000 Buddhist temples, pagodas and monasteries were constructed in the Bagan plains alone.

The Indian Space Research Organisation (ISRO) is all set to launch a new navigation satellite on August 31.

IRNSS-1H will replace IRNSS-1A which failed due to deficiencies in three atomic clocks that are crucial in providing positional information to users on earth.

IRNSS-1H will be launched on board ISRO’s PSLV-C39. The new satellite will expand the existing seven satellites of NavIC constellation.

What is a navigation satellite?

A satellite navigation is based on a network of satellites that transmit radio signals to determine the geospatial location of the receivers with high accuracy.

The satellite systems can be used for providing position, navigation or for tracking the position of something fitted with a receiver.