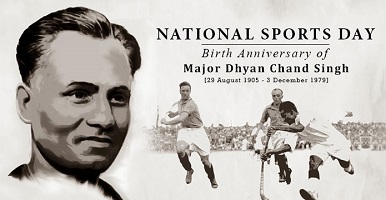 Kazakhstan is all set to open the world’s first Low Enriched Uranium Bank in Oskemen.

The International Atomic Energy Agency (IAEA) launched the project in 2010.

The bank will hold 90 tons of uranium—enough to power a large reactor for three years—and member states that withdraw from the bank will cover the cost of restocking.

To ensure transport, the IAEA signed an agreement with Russia in 2015 to allow the material to travel through the country.

The bank will serve as a source of last resort for low-enriched uranium when IAEA members are unable to either produce it or if it becomes unavailable on the international market for whatever reason.

The IAEA, which manages the reserve, has established a series of strict criteria for a member state to request and purchase uranium from the bank.

The National Sports Day in India is celebrated on 29 august every year.

This day marks the birthday of Dhyan Chand, the hockey player who won gold medals in Olympics for India in the years 1928,1932 and 1936.

Gobindobhog rice, a speciality from Burdwan district of West Bengal, has got the geographical indication (GI) status.

Significance of this move:

As a result of getting the GI tag, as the certification is also called, rice from other regions or rice of other varieties cannot be branded as ‘Gobindobhog’.

Hence, the marketability of the rice would be strengthened, for the local, national and international markets.

It is cultivated late and therefore not much affected by rains.

It is less prone to pests as well. The productivity per area is high and farmers get better prices for Gobindobhog rice.

In this game, India did not win any medals.