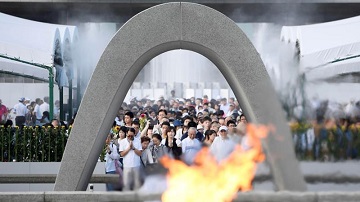 Aiming to eliminate measles and curb instances of rubella by 2020, the Centre has rolled out the second phase of its measles-rubella (MR) vaccination campaign in the country.

While measles is a viral infection that can be fatal, congenital rubella syndrome is responsible for irreversible birth defects.

The Union health ministry’s campaign against the two diseases intends to cover approximately 41 crore children in a phased manner, making it the largest-ever worldwide.

The first phase of the campaign was launched across five states — Tamil Nadu, Karnataka, Goa, Lakshadweep and Puducherry — in February this year.

After SC order, focus on chemicals in firecrackers

The Supreme Court ban on the use of antimony, lithium, mercury, arsenic and lead in the manufacture of firecrackers to prevent air pollution has turned the focus on what chemicals are used to produce spectacular visual effects and noise.

Experts say none of the specific products banned by the court are used.

The Supreme Court, in it’s order, had directed that no firecrackers manufactured by the respondents shall contain the chemicals.

The banned chemicals include antimony, lithium, mercury, arsenic and lead in any form whatsoever.

The court entrusted the Petroleum and Explosive Safety Organisation (PESO) with the responsibility of ensuring compliance particularly in Sivakasi.

Over 90% of cracker production is done in Sivakasi.

However, cracker manufacturers in Sivakasi, who denied using the banned chemicals, said the sound and light show is produced by chemicals such as sulphur, aluminium powder and charcoal (used as fuel), besides potassium nitrate and barium nitrate (as oxidising agents).

Japan, on August 6th, marked 72 years since the world’s first nuclear attack on Hiroshima, with the nation’s traditional contradictions over atomic weapons again coming into focus.

Japan suffered two nuclear attacks at the end of the World War II by the United States — in Hiroshima on August 6, 1945 and in Nagasaki three days later.

Some died immediately while others succumbed to injuries or radiation-related illnesses weeks, months and years later.

Japan announced its surrender in World War II on August 15, 1945.

Many in Japan feel the attacks amount to war crimes and atrocities because they targeted civilians and due to the unprecedented destructive nature of the weapons.

But many Americans believe they hastened the end of a bloody conflict, and ultimately saved lives, thus justifying the bombings.

They have lost against English pair of Jenny Duncalf and Alison Waters in the semifinals.