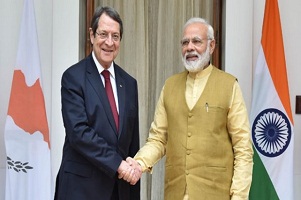 Co-operation in the field of Executive programme on Culture, Education and Scientific Research for the year 2017 – 2020.

Co-operation in the area of Merchant shipping.

Co-operation in the area of boost air services between the two countries.

A safer alternative to lithium-ion batteries

These batteries are made up of three-dimensional Zn “sponge”.

These batteries replaces the normally or traditionally used powdered zinc anode or positively charged electrode in the batteries.

Repeated cycles of charging and discharging cause zinc atoms to pile up on one of the electrodes.

That causes the growth of “dendrites,” tiny zinc spears that can pierce other parts of the battery, causing it to short-circuit and fail.

With Zn, the battery provides an energy content and rechargeability.

Zinc-nickel battery provides nearly the same electrical jolt, but not the fire risk of Li-ion cells.

The first ever Athletics meet for Transgender persons organized by the Kerala government at Trivandrum’s Central Stadium.

The first-of-its-kind tournament saw them taking part in popular track and field events such as sprint, relay race, shot put and long jump.

India had won seven medals, including a gold and 4 silver in the first leg.