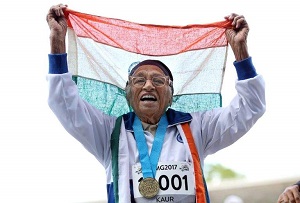 This report ranks countries based on their military spending.

India is now the world’s fifth largest spender on defence for 2016 after having moved up from the 7th place following its largest annual military spending increase since 2009.

Our neighbor China is the second largest spender.

This IT hub would help to create employment opportunities for the IT educated youths and to further extend the e-governance to the door step of people.

The Fourteenth edition of Indo-French naval exercise (VARUNA) started with the arrival of four French naval ships at Goa.

Man Kaur crossed the line in 1min 14.58sec. It is almost 1min 4sec short of the women’s world record for the distance.

The Prime Minister Shri Narendra Modi will flag off the first UDAN flight under RCS on Shimla-Delhi sector on 27th April, 2017.

The Ministry of Civil Aviation is committed to providing air connectivity to currently underserved and unserved airports.

In this scheme, the flight will be priced at cost of rupees 2,500 for 1 hour flying in regional areas.

It also provides connectivity to un-served and under-served airports of the country.

The scheme should be operate for period of 10 years.

It will based on marketing mechanism.

This is a first-of-its-kind scheme globally to stimulate regional connectivity through a market-based mechanism.