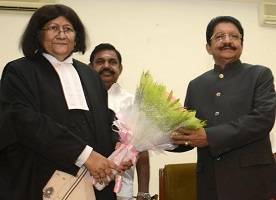 Topic: History – India and its Neighbours

These countries are coordinate the planning of projects and activities to increase economic growth by building transport connectivity, facilitating faster and more efficient trade, and promoting cross-border power trade.

South Asia Subregional Economic Cooperation (SASEC) programme of Asian Development Bank (ADB) is expanding towards the East with Myanmar formally becoming the seventh member of the Corporation in 2017.

Ports in Myanmar will provide additional gateways to the landlocked North Eastern region of India.

Topic : History – New Appointments, Who is Who?, Persons in News

Justice Indira Banerjee, a sitting judge of the Delhi High Court, has been appointed as the new Chief Justice of the Madras High Court.

She will sworn in as Chief Justice on April 5.

Indira Banerjee will succeed Justice Sanjay Kishan Kaul, who was elected to the Supreme Court on February 18.

She enrolled as an advocate in 1985 and practiced both in original and appellate sides of Calcutta High Court.

She is the 2nd woman to hold the post after Kanta Kumari Bhatnagar.

She was appointed as permanent judge of the Calcutta High Court on February 5, 2002 and was transferred to Delhi High Court on August 8, 2016.

On April 4, NASA will hold a press conference to unveil the beginning of Cassini’s last mission segment, called the Grand Finale.

Cassini is an unmanned spacecraft sent to study Saturn by the NASA.

When was Cassini launched?

After taking on a voyage passing through the flybys of Earth, Venus and Jupited, Cassini began orbiting Saturn since June 2004, studying the planet, its rings and its moons.

What does this final mission involve?

Cassini will explore areas of Saturn that have been untouched up until this point.

It will get the closest look ever at Saturn’s outer rings.

Cassini discovered previously unknown moons in orbit within the planet’s rings. These include Methone, Pallene, Polydeuces, Daphnis, Anthe and Aegaeon.

One of its most important discovery was Enceladus – a frozen moon that shoots out icy jets as it gets warped by Saturn’s gravity.