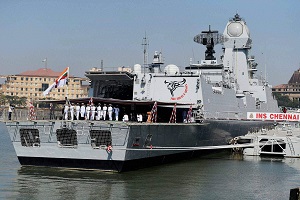 This will be the second milestone in the Rs 12,000 crore project to pump Narmada water in 115 dams of arid Saurashtra region after the PM dedicated to public phase-I of the Link-I canal in August 2016.

What is the SAUNI Yojana?

The project is not a part of the Narmada project but is based on it.

1 MAFT (million acre feet) flood water has been allotted to Saurashtra by the state government and this water will be pumped to major reservoirs in the region under the SAUNI Yojna.

Unlike traditional irrigation projects, SAUNI is technically a ‘linking’ project, where the water will be filled in irrigation dams that are already equipped with canal network.

This network of canals will then help channel water into farms.

The pipelines in the SAUNI project are underground, which means that no land needs to be acquired.

Canberra, Capital city of Australia is keen on joining the Malabar trilateral naval exercises among India, Japan and the U.S.

This Malabar trilateral naval exercises is scheduled in july for the upcoming edition.

Australia had been a part of the exercises in 2007.

But a sharp response from China, which saw the joint exercises as a coalition against it, put an end to the quadrilateral format.

Under Khurki system, the British planters used to pay some money to the farmers (Raiyyat) by mortgaging their lands and houses and compelling them to sow indigo.

The British administration and Jamindar had established “Teen Kahitya” system under which teen katha land out of one bigha was reserved for indigo (Neel) farming.

The farmers had to bear the cost of indigo farming and the British planters used to keep the yields without compensating the farmers.

Naval ship ‘INS Chennai’ was formally dedicated to the city today in the presence of Chief Minister K Palaniswami.

It was named after the city, the ship is commanded by captain C R Praveen Nair and has 45 officers.