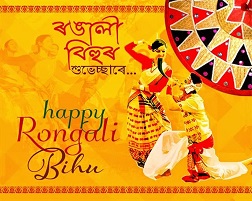 Polythene Bags Banned in Madhya Pradesh from May 1

Madhya Pradesh Chief Minister Shivraj Singh Chouhan announced a total ban on polythene bags in the state from May 1.

These states were plastics banned states in India.

Bohag Bihu, also known as Rangoli Bihu or Haat Bihu is a seven-day long festival as per the traditional Assamese New year Calendar and starts from 15th April 2017 and goes on to 21st April 2017.

Each festival historically recognizes a different agricultural cycle of the paddy crops.

Bihu Festival is celebrated in three times in a year with different farming phases.

These are Bohag Bihu, Kongali Bihu, and Magh Bihu.

The first time in Indian Railways’ history, Habibganj station in Bhopal has been handed over to a private firm to be operated by it.

The station building will be developed in line with airport terminals and that trains at the station will still be run by the Railways.

This private sector is formed by a consortium of Bansal Construction Works and Prakash Asphalting and Toll Highways has together.

Third Gender formed by the SC

The Supreme Court created the “Third gender” status for hijras or transgenders.

Earlier, they were forced to write male or female against their gender.

The third gender people will be considered as OBCs.

The SC asked the Centre to treat transgender as socially and economically backward.

The apex court said that transgenders will be allowed admission in educational institutions and given employment on the basis that they belonged to the third gender category.

She was awarded for providing women working on farms with water management solutions and protecting small farmers against droughts and flash floods.

An Indian-born aeronautics engineer Arvind Sinha from Australia has been honoured with the ‘World’s Outstanding Aerospace Engineer Leadership Award’ by the American Helicopter Society (AHS) International.

Sinha, who received the award recently in the US, was also bestowed the title of AHS Honorary Fellow in May 2016.

He is working on Australian Army and Navy Aviation platform and systems technologies.

He is an expert in Tactical Aerospace systems, covering helicopters and unmanned aircrafts.

The depression over East-central Bay of Bengal has turned into the tropical cyclone ‘Maarutha’.

All fishing boats and trawlers over North Bay and deep sea have been advised to remain close to the coast and proceed with caution till further notice.