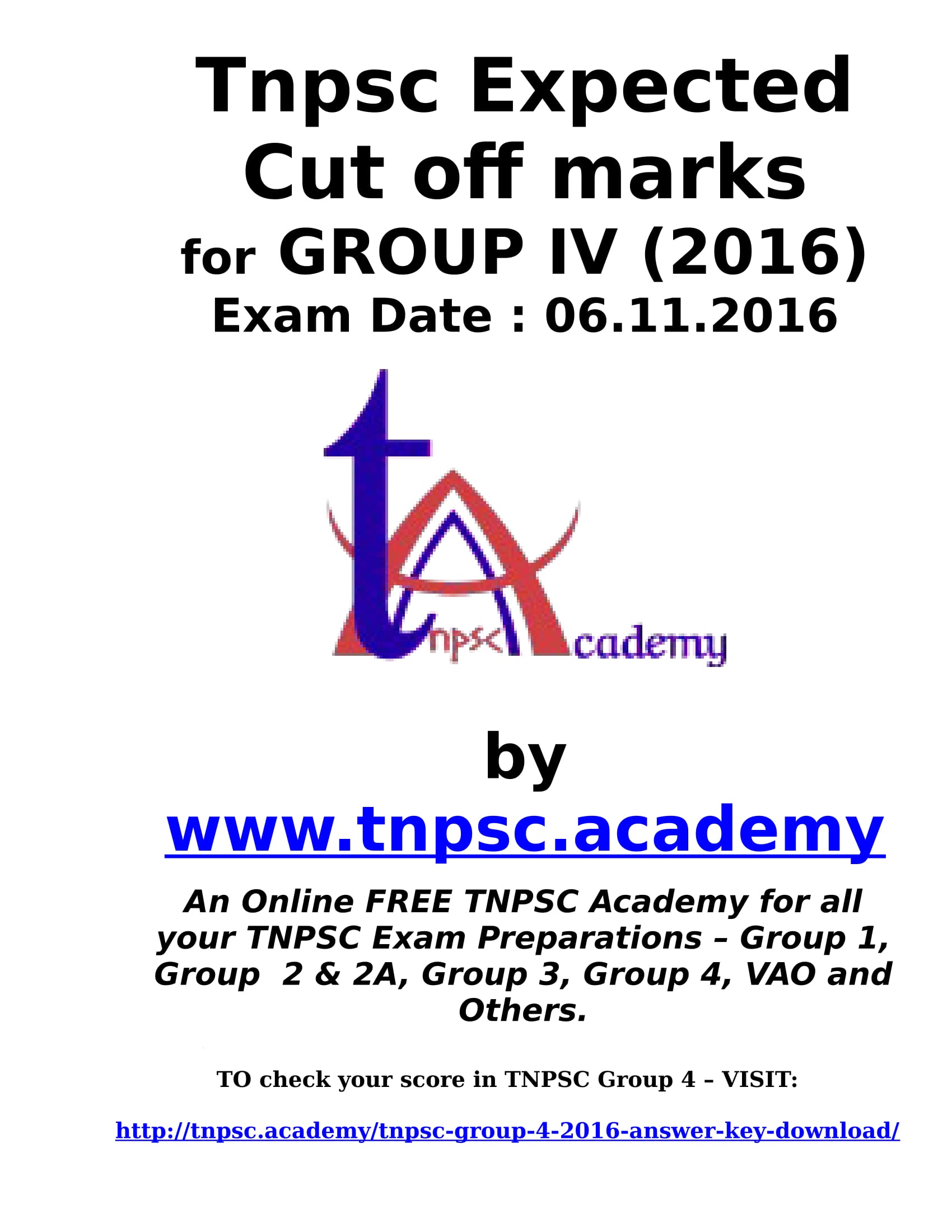 The TNPSC Group 4 Exam was conducted by the Tamil Nadu Public Service Commission on 06.11.2016. Many aspirants have appeared in the exam and have done well. Check TNPSC Group 4 answer key and estimate your score in the tnpsc group 4 exam.

The initial analysis of tnpsc group 4 2016 exam reveals that,

TNPSC Group 4 Cut Off for 2016 Published by www.tnpsc.academy

How we arrived at the below Cut-Off level?

The below Cut-Off level for TNPSC Group 4 was arrived at analyzing nearly 7,000+ aspirant’s Group 4 score which was collected both from Online and Offline up to today (11.11.2016).

There was an expectation that the Cut Off may raise more than 175 for General Category. But if you go through the Question Paper, you may analyse that, though the General Studies questions were comparatively easy, TNPSC had also included some difficult and tricky questions this time too. Nearly 10 general studies questions can be attributed like that (we are referring to a normal aspirant). The difficulty level of General Tamil and General English were more or less same. So there no much deviation among those aspirants who took corresponding paper.

When we collected the data and analysed, we studied that, the General Range of scoring by aspirants came between 160 to 170 Correct Questions. The next level of scoring was 155 to 160. Taking the 160 to 170 level and analyzing within it, also by taking the category correspondingly we arrived at the below cut off level.

You may have seen that, many people telling as they have scored more than 170+  and you may worry that as Cut Off level. But do remember that, those people who have scored more this time have raised their voice at first and accordingly most of those at the actual cut off level (below 170, above 160) have started worrying and didn’t say their cut off OPENLY in many sites and other social media. But true collection of data (from various academic sources, online social media) and analysis made as to arrive as to the below level.

Also remember that, the cut off may further reduce for the corresponding Phases in the counselling. As TNPSC usually conducts various counselling phases until the vacancies are filled.

Get an alert for all TNPSC latest notifications and our updates in your inbox by subscribing to our newsletter.