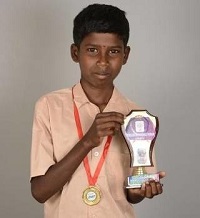 On January 3, the Earth will be at closest to the sun in a phenomenon called ‘Perihelion’.

Perihelion is an important event for research and educational purposes although the public cannot observe it.

Commonly it is believed that the distance of the earth from the sun decides the season or temperature on the earth. But this is not true.

The axial tilt (approx. 23.5 degrees) of the earth on its axis while revolving around the Sun regulates seasons on the earth with one of the hemispheres facing away or towards the Sun.

So, while the earth is closest to Sun this time in January, it is winter in India and countries in Northern Hemisphere, it is summer in the Southern Hemisphere.

This is China’s first tax clearly designed for environmental protection, which will help establish a “green” financial and taxation system and promote pollution control and treatment of pollutants.

According to the updated IUCN (International Union for Conservation of Nature) red list, here are the species that were marked as “EXTINCT”:

Christmas Island Pipistrelle : This small bat found exclusively on Christmas Island, Australia was listed as critically endangered last year. Predation, loss of habitat, and diseases were pointed out as causes for its extinction.

Christmas Island Whiptail-skink : Another species endemic to Christmas Island, this lizard went extinct this year. Non-native predators and insecticide poisoning drove it over the edge.

Christmas Island chained gekho : The species is listed as extinct in the wild, which means it is now found only in a captive breeding programme.

Gunthers Dwarf Burrowing skink : Though no record of the skink has been made for more than 125 years, this native of South Africa was officially confirmed to be extinct only this year.

At the National Children’s Science Conference in Gujarat, Erode’s Tribal student has got a young scientist award.

Chinnakannan, a student from Erode has reportedly won the Young Scientist Award at the National Children Science Congress for his paper titled ‘Loss of Energy due to lack of Transport in Mountainous Areas’.

The 25th National Science Conference took place in Ahmedabad, Gujarat from December 27 to 31.

In the submission of more than 30 research papers from Tamilnadu, only 2 articles were selected for the conference.

This is an essay of the students of the Pargur Mountain Child Labor School of Erode District.

The lack of access to the mountain area, which was sent to the head of the energy losses, attracted everyone’s attention.